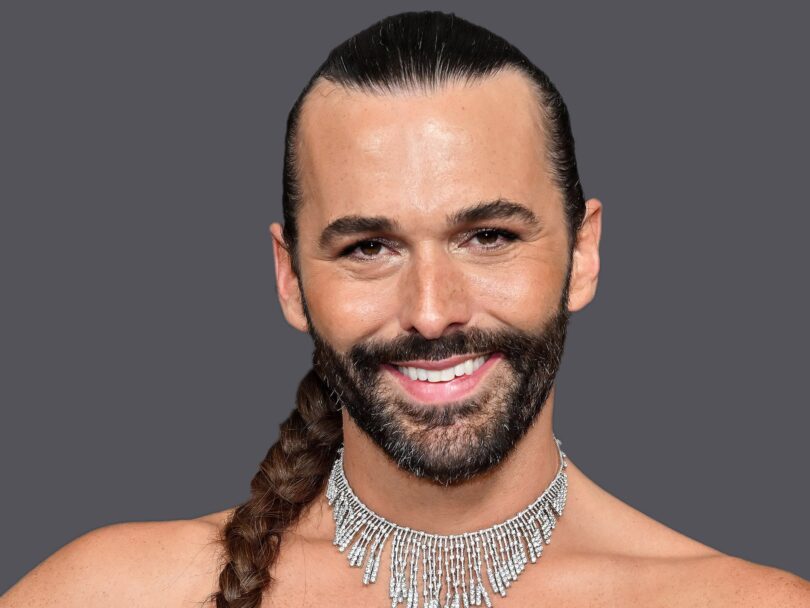 When the podcast Getting Curious with Jonathan Van Ness first dropped in 2015, it was with an episode titled, “What’s the Difference Between Sunni and Shia Muslims and Why Don’t They Love Each Other?” in which the then Gay of Thrones star spoke with a UCLA professor to hash out centuries of complicated strife. The show was a modest success, but three years later Van Ness was nabbed by Netflix to become one of Queer Eye’s new Fab Five and found himself suddenly beloved by millions of new fans.

Since then, Van Ness has written a memoir, a children’s book, and an essay collection; been nominated for multiple Emmys; spent time in DC lobbying for LGBTQ+ rights; come out as both non-binary and HIV positive; begun touring a live show that blends stand-up and gymnastics; and even launched his own line of hair care products. He’s also turned the podcast into a Netflix show.

Through it all, though, Van Ness has still made time for his podcast, with Getting Curious dropping its 300th episode last week. Topics along the way have ranged from fatphobia to The Great British Bake Off, with Van Ness maintaining that he’ll cover anything as long as he’s genuinely interested in it. “I’m just so curious about us in the United States, how things got this way, and how we became who we became,” says Van Ness. “I feel like I’ve grown up with the show, and so much of what I know about life, I’ve learned while recording this podcast.”

With an eye toward sharing some of that education, Van Ness whittled down the massive Getting Curious library to his nine favorite episodes, choosing a selection for WIRED that he hopes “turn more people on to their passions.”

Van Ness: [Data journalist] Meredith Broussard’s work is something I reference a lot. Techno-chauvinism on the whole is the idea that machines know how to do things better than humans. She used the example of a set of automatic blinds. It’s nice to press a button and make it go up, but when it breaks, you can’t fix it. Whereas if you had manual blinds, you’d just go over and lower the blinds with the string and it would be working fine. It would be easier to fix.

So, techno-chauvinism is baked into the systems that influence our day-to-day lives in really important ways. If you’re at a TSA scanner, for instance, you might get pulled out of a line because you’re listed as a man but you’re wearing a longer shirt, so you may get a pat down that someone else may not get, just because those algorithms don’t know how to recognize the nuance that a human eye would be able to identify.

Van Ness: Tina Lasisi is an evolutionary biologist and studies human hair variation, but she also studies how we got here, like the evolution of human hair variation and scalps. So much of what I learned in hair school about why curly hair is curly, why wavy hair is wavy, why straight hair is straight … it’s all a lie. It’s not even true. In hair school we’re told that if your hair is coily, that it’s more kidney bean shaped. Curly hair is more like an oval, and then straight hair is more like a perfect circle. But in her work at the lab, they’ve actually found every single type of hair in all of those shapes.

The really scary thing about it is that all of this false hair science was used in crime scene investigation in the ’80s and ’90s, like, “This hair was there and because it’s kidney bean shaped we know it was a Black person.” It’s more nuanced than that.

We think of science as being an infallible thing. It’s real. It’s science. This stuff must be completely accurate. But as science evolves and people learn more, those facts can become more nuanced and more complicated. That doesn’t mean that someone was trying to necessarily be malicious, but that you just learned more. Of course, there were other times where stuff was based on full-on malicious shit, but not always.

Science doesn’t operate on this island of perfection where it’s not capable of being influenced by outside factors like misogyny, racism, and classism. Science is a reflection of the time and what is going on in society, because the questions that we’re trying to ask in science are largely reflections on questions that are being asked by people and culture.

Van Ness: [Sociology professor] Sabrina Strings’ episode about fatphobia is another place where we talked about how science is a reflection of the time and the place where it’s produced. The whole idea of body mass index (BMI) was invented by a bunch of white dudes that were studying a bunch of white people in the ’40s. They weren’t even looking at people that were from other places and they used a very small cross section of society to say, “This is the proportion that you should be to be healthy.” That episode was super illuminating for me personally.

Van Ness: There are so many guests whom I would love to have back for a second time. [But Meredith Broussard] is an extra special guest who just blew my mind. It’s kind of like, “I hope they don’t regret giving me their number,” because now we’re friends and I ask her a lot about tech things and other stuff I’m curious about.

That specific episode is about data collection and the ways we interact with systems that are already tracking us. So how do we move forward? Part of it is being aware of legislation around privacy and making sure that we’re asking our elected officials to protect us and make sure that our information isn’t being shared with the wrong people. It’s about being aware of what’s going on when we’re interacting with systems that track our movements, too.

Van Ness: The animal kingdom is super duper queer. It’s also not heteronormative in the way that you might think, biologically.

Take seahorses, for instance. Male seahorses carry their babies. There are a lot of examples in the animal kingdom that go against the super heteronormative ideas that we have.

Van Ness: This episode was recorded after the [Dobbs US Supreme Court draft opinion] leak but before the decision actually came out, and while it wasn’t necessarily fun to learn about, the episode ended up being really exciting. Even listening to it, what I was learning in real time was that Chief Justice John Roberts’ whole opinion was based on the idea that abortion isn’t deeply rooted in the American way of life.

In reality, in history, there’s so much clear evidence since the 1700s, and even prior, of women wanting to control their reproductive autonomy. It just looked different in the 1600s and 1700s. It was midwives who would give potions or concoctions to try to handle an unwanted pregnancy and sometimes women would die.

Actually, I learned in that episode that the first law regulating abortion was passed in the Northeast in the 1830s and it was about prosecuting unscrupulous midwives who were pushing potions that were killing women. It wasn’t about criminalizing or attaching this morality to an unborn fetus. That came later on.

Van Ness: The really scary thing that I learned in this episode is that there’s a lot of money being made in the child welfare system. There are these places that get a dollar amount per night per kid that they have in a bed. Many of those kids are eventually reunited with their parents, but it puts kids through these really horrifically stressful situations of being separated from their families.

Mass incarceration is also a huge source of family separation in the United States. There’s so much irreparable harm that’s done to these kids, and a lot of times the ways that people even get into these systems are racially motivated and class motivated, where someone is turned in for child endangerment because their kid wears the same outfit too often so someone thinks that they’re being neglected. That family may not be able to afford seven different outfits. There are reasons why kids might repeat outfits that aren’t them being abused or neglected. But if that family can’t afford a good lawyer and they’re relying on someone who’s got all of these cases, then they’re stuck.

Van Ness: The story of ice in Hawaii is incredible. The roads lead back to colonialism—and usually it does, which is another thing that I’ve learned on the podcast—but there’s a lot of technology and culture and drama to that story.

The thing that I found so fascinating is how ice was just a swath of people’s idea of what brings you refreshment. Ice at one time was not a thing that people wanted in their drinks. I remember growing up, when people would go to Europe from your hometown, they’d come back and you’d say, “You went to Europe! What was it like?” and then they’d be like, “They don’t have ice in their drinks.” Like that would be a huge thing.

It’s about this idea of what is chic, what is sought after, and what makes someone a have and what makes someone a have-not. What are the things that instantly identify, “That person’s got it going on,” or “That person’s got money,” or whatever. Ice was one of those things and it’s just so interesting why things have happened. It can be a sad story, but it can also be happy, because now Hawaiian shaved ice brings people together. So it’s all a double-edged sword.