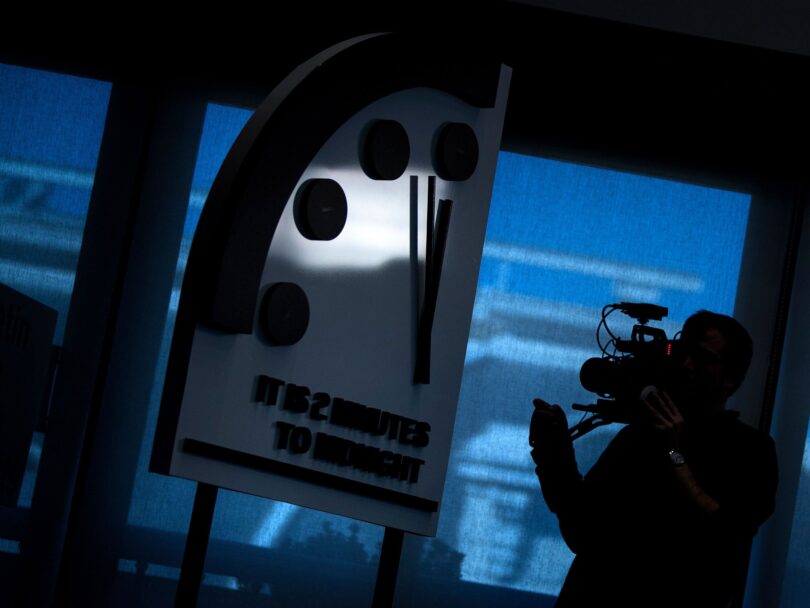 Since 1947, the Doomsday Clock has ticked away the minutes toward—or away from—annihilation. Each year, researchers at the Bulletin of the Atomic Scientists decide where the hands on the iconic graphic will fall—the closer they are to midnight, the closer it appears we are to some doomsday event that could end humankind. For the past two years, they’ve set the clock at 100 seconds to midnight. Then on January 24 2023 this was revised down to 90 seconds to midnight, suggesting the world is closer to catastrophe right now than at any other point in the last 76 years.

Originally intended to convey how close the world is to nuclear war, the Doomsday Clock has expanded its remit in recent years. Since 2007, the researchers responsible for setting the clock have also considered climate change, as well as any human-made threats that might spark a global catastrophe. In 2020, the Bulletin’s Science and Security Board cited increased nuclear tensions and a failure to address climate change as the main reasons why the Doomsday Clock’s hands were set so close to midnight.

Nuclear war and climate change are two huge, complex topics that the Doomsday Clock has to distil into a single graphic. It’s a lot of heavy lifting for a metaphor born in an era when annual global emissions were just 13 percent of today’s levels and the Intergovernmental Panel on Climate Change didn’t even exist. Lumping together these two risks—and all the other ways mankind could mess up the planet—blurs the meaning of one of our most powerful symbols. Maybe it’s time to wind back the dial on the world’s most famous clock face.

One of the difficulties with representing climate change and nuclear war in the same graphic is that the two risks play out on totally different timescales. A ticking clock does a good job of representing how close we are to catastrophe right now, but each extra kilogram of carbon dioxide we emit into the atmosphere is setting the stage for a disaster at some undefined point in the future. “Each year you continue to emit carbon dioxide more bad stuff is baked into the system,” says Raymond Pierrehumbert, a physics professor at the University of Oxford and one of the members of the Science and Security Board that sets the Doomsday Clock.

The risk of nuclear disaster tends to shift in more discrete steps. In 1991 the Doomsday Clock stood at 17 minutes to midnight—beyond the original 15-minute scale of the design. It was the furthest from the apocalypse the clock had ever been, thanks to the Strategic Arms Limitation Treaty and the disintegration of the Soviet Union. “The setting of the Bulletin Clock reflects our optimism that we are entering a new era,” wrote the Bulletin’s scientists at the time of the announcement.

It’s hard to draw such clear lines with climate change. On one hand, the world is facing a more secure future than if governments had taken no action on climate change. According to Climate Action Tracker, current policies have us on track for around 2.7 degrees Celsius of warming by 2100. This level of warming will have devastating consequences, but it’s better than the situation we were facing in 2013 when existing policies had the world on track for 3.7 degrees of warming. Landmarks like the Paris Agreement and the US Inflation Reduction Act show that meaningful action on climate change is possible.

But at the same time, annual carbon emissions are still rising. While the future is looking better, right now things are still getting worse. This presents a conundrum for the scientists who set the Doomsday Clock. Do they go on future pledges, or the situation right now?

“In my view, and in the view of a lot of us, every year that we continue to emit carbon dioxide into the atmosphere the needle should click a little bit forward to doomsday,” says Pierrehumbert. But there’s only so many times you can move the minute hand closer to midnight. Adding more increments would increase the Doomsday Clock’s nuance, but setting the clock at 99.4 seconds to midnight doesn’t exactly have the punch that its original designers were aiming for.

Counting down to midnight is an intuitive way to think about nuclear war. Either the world is at nuclear war, or it’s not. There is nuance here—a tactical nuclear weapon, for example, is not the same as a full-scale nuclear war—but at a very broad level, nuclear war as the original Bulletin scientists thought of it was a fairly binary state of affairs. Climate change is much more nuanced. Most scientists agree that there is no clear cliff edge of disaster when it comes to climate warming. Instead, there is a slow ratcheting of global catastrophes as well as an increased likelihood of climate tipping points, where certain climate systems alter suddenly and irreversibly.

These high-impact, low-probability events are poorly understood, but they’re not the only ways that climate change can have a severe effect on the planet. As existential risk researcher Luke Kemp has noted, a much warmer world is less resilient to other kinds of catastrophic risks. It’s harder to imagine humanity bouncing back from a terrible pandemic or a nuclear war in a world with catastrophic levels of warming. Climate change isn’t only a doomsday risk in itself—it’s a risk multiplier that increases our vulnerability to all kinds of events.

“If you were starting from scratch, you might think for climate you’d have something more like a thermometer,” says Pierrehumbert. But even that metaphor has its drawbacks. Would the temperature represent warming now, or what we have in store for the future? And is there a temperature equivalent to midnight—a real point of no return? Pierrehumbert suggests that warming that would make the world uninhabitable for about half of humans could be considered a climate doomsday-like event. We’re not on track for anywhere near this amount of warming, but as Pierrehumbert points out, as long as there are fossil fuels left to burn, the risk of climate change never completely goes away.

One downside of the clock metaphor, regardless of the threat being considered, is that it makes us concentrate a little too much on the here and now. “The clock isn’t really meant to say how risky a nuclear war is this year,” says Pierrehumbert. It’s meant to be an assessment of the fundamental state of risks that could take decades to play out. These are already complex, and climate change is like a multiplier to these risks—add it into the mix and everything else just becomes that little bit more uncertain and chaotic over long periods of time.

Where does all this leave the Doomsday Clock? It remains a powerful reminder that self-inflicted disaster is never far away. But it also undercuts the complexity of climate change and the way that risks spread across time and bleed into one another. Viewed from a time when we face a multitude of possible catastrophes—pandemics, rogue AI, and a rapidly warming planet—the Doomsday Clock is a warning from a much simpler era.