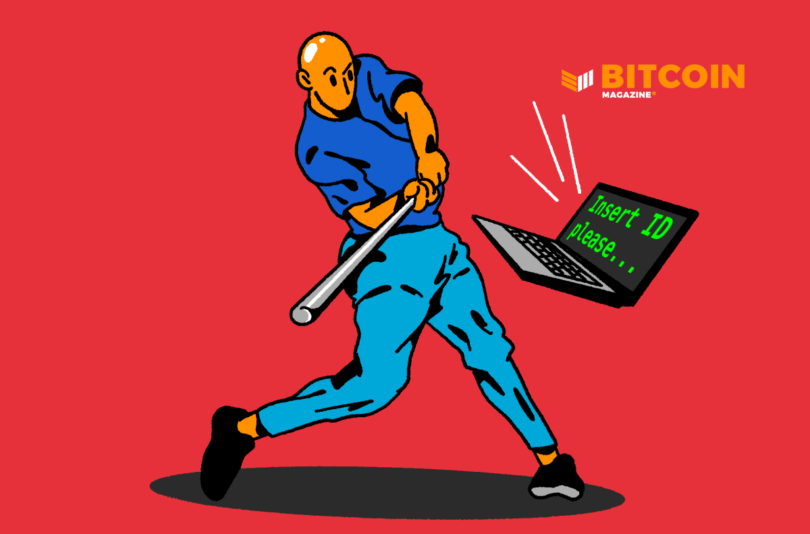 This is an opinion editorial by Okada, mechanical engineer and contributor to peer-to-peer bitcoin exchange RoboSats.

Buying your first bitcoin has dramatically changed since the early days of trading on forums or Internet Relay Chat (IRC). Large exchanges sprung up and nowadays, they’ve perfected the art of attracting newbies through demystifying the buying experience with seamless and, quite frankly, mindless user interfaces.

Over time, regulators pressured exchanges into collecting users’ data to verify their personal credentials. Exchanges such as these — we’ll call them “verification” exchanges (VEXs) — have custody of your funds and have tools at their disposal to track your identity-linked funds on chain. The reader should already be aware of the advantages of self custody, a topic worthy of its own detailed exploration.

The convenience of mainstream VEXs such as Coinbase and Binance have effectively perverted end-user expectations of private, peer-to-peer (P2P) alternatives when buying bitcoin. Consequently, they are disinclined to use alternatives despite the immeasurable benefits to be gained.

To clarify, we are defining exchanges by their requirements for users to supply identifying information, not whether they are centralized or decentralized in nature. Centralized exchanges (CEXs) can operate privately, P2P if they hold no information on their users and do not custody funds.

Centralization doesn’t have to sacrifice end-user privacy if the exchange only performs the role of a blind matchmaker and, if shut down, can simply be relaunched by cloning its open-source repository. Therefore, the distinctive “VEX” label is more appropriate than incorrectly referring to all CEXs as having poor privacy.

For full disclosure, the author contributes to the open-source, P2P exchange RoboSats, but this article is not endorsing just one P2P exchange; rather, it is an endorsement for use of any private, P2P exchange.

Anything is better than using VEXs!

Note: In many jurisdictions, using a P2P service is no different than using eBay or Craigslist. It is your responsibility to know your jurisdiction’s stance.

The Problem With Verification Exchanges

Obviously, the problem with VEXs is the utter lack of privacy. Users are required to submit self-identifying information like a driver’s license or passport that will perpetually link purchased bitcoin to that user.

To reiterate, a user’s real name is forever associated with that bitcoin and all downstream transactions. If they withdraw that bitcoin from the identifying exchange and use mixing services, the public ledger can make this evident and authorities may associate that action with criminal activity, regardless of the user’s intent.

On top of leaving a digital paper trail, their email, password, phone number and fiat bank credentials can become exposed as bad actors can access this information through hacking or by disgruntled exchange employees leaking users’ personal information. Or, as evidenced by recent exchange collapses like FTX’s, they risk losing their bitcoin since they don’t truly possess the private keys.

Many buyers and sellers use these privacy-invasive exchanges primarily because they wield vast liquidity in a slew of local currencies and their slick mobile apps make buying and selling bitcoin a trivial task. What’s more, they’ve built addictive casinos aimed at increasing user retention with every confetti-filled, dopamine-inducing trade.

Unfortunately, many of the owners and operators of VEXs rabidly advocate for “adoption-friendly” regulations by collecting their customers’ data under the guise of protecting honest users, but, the collection of sensitive user data in the first place is ripe for exploitation by cybercriminals. The simple solution is to avoid VEXs altogether.

Why Use Private, P2P Alternatives?

Consider the second-order effects of using, and thereby supporting, anti-privacy exchanges. How you buy and sell bitcoin will have amplifying effects on those exchanges and the greater Bitcoin network.

When using a VEX, you are amplifying the practice of invading privacy and giving credence to the normalization of it. Speaking with your wallet has never been more applicable than when you buy bitcoin with your hard-earned fiat.

If using a P2P exchange, then you are contributing bitcoin or fiat liquidity to that platform and thus amplifying the immediately-available liquidity so that more users can benefit from privacy-oriented exchanges rather than relying on VEXs.

The result of supporting VEXs will restrict fiat on-ramps and lead to a failure of Bitcoin’s core ideology as a permissionless, P2P, electronic cash system; on the other hand, supporting P2P exchanges will reinforce the permissionless nature of Bitcoin and create a more robust privacy network for anyone to freely use.

The following sections look into the expectations for a P2P exchange for some of the users who are accustomed to VEXs.

In this author’s experience, the biggest “complaint” from users of VEXs regarding P2P exchanges is the lack of immediately-available liquidity for some currencies and fiat payment methods. Every P2P exchange launches with low liquidity and only grows if their user base grows.

Such is the origin of any P2P exchange; they do not have sudden, vast liquidity at the get go and without anyone bothering to contribute liquidity, P2P exchanges would cease to exist. Without a marketing budget, they can’t really do anything besides bring in more users with word-of-mouth advertising.

In the case of RoboSats, we have seen that many new users will only check the order book at that specific moment and very often assume weak liquidity, but they do not realize that untaken orders expire in 24 hours and successful trades are not visible. The trade turnover is actually quite high and orders get taken relatively quickly. Interestingly, behind the apparent lack of liquidity is a highly-liquid market.

In short, P2P exchanges get better with more liquidity and users.

Buying and selling bitcoin on a private, P2P exchange usually involves a premium. Users who are accustomed to the VEX lifestyle may hesitate paying above the bitcoin-to-fiat market rate for fear of getting fewer satoshis for their fiat. Conversely, users who value privacy take no issue paying extra for their anonymous bitcoin.

In P2P markets where there are imbalances between supply and demand, premiums are used on buy and sell orders to incentivize anonymous peers to provide liquidity to the marketplace. If you are buying bitcoin in a currency or payment method that is inconvenient for the seller then, by raising your premium, you may attract someone willing to go out of their way for more satoshis. You have to make it worth their time.

If selling bitcoin, you can gain more fiat in exchange for it when using P2P services versus using VEXs. From the seller’s point of view, the order premium is an opportunity for profitable arbitrage that also incentivizes sellers to part ways with their desirable bitcoin for undesirable fiat.

From one perspective, the market rate on VEXs could be viewed as a discounted version of bitcoin that will invade your privacy at the “benefit” of more satoshis in your stack, whereas the market rate on P2P exchanges can be seen as the real bitcoin market evaluation that users are paying to truly secure their wealth and protect their personal privacy.

It should go without saying, but wanting to transact bitcoin privately has absolutely nothing to do with criminal activity, like lawmakers so desperately preach; rather, it is solely to protect yourself from criminal activity against your wealth and, potentially, your life. If you practice multisig because you take the $5 wrench attack seriously, then you should also transact bitcoin privately. The idea that your life is in danger by exposing your identity may sound extreme, but it is not some farfetched, radical fantasy.

Bitcoin bought privately will always carry a premium because the market will forever value it more than bitcoin that is bought with the capability of exposing your personal finances.

No exchange is perfect and that applies to both VEXs and P2P exchanges. No matter how streamlined or “foolproof” the platform appears to be, users can still run into trouble. When they do encounter issues, there’s nothing more comforting than knowing a real human being is there to help.

In contrast to your typical customer service employee, the volunteer developers and contributors are often more than willing to go out of their way to resolve problems and issues since they have more ambition and desire to keep users enjoying the platform.

Moreover, P2P platforms are more likely to provide tailored solutions since problems that occur are more often than not outside of the platform’s control, like issues with a certain third-party wallet or Lightning Network limitations.

In this author’s observation, the response times, positive attitudes and general helpfulness of P2P exchanges far exceeds that of VEXs where users resignedly gripe about their terrible and incompetent customer service departments.

By exploring some of these warped expectations, hopefully readers will adjust theirs accordingly when using the variety of privacy-focused exchanges available. While, ideally, expectations should not need to be adjusted, users need to recognize the plain realities when using smaller, lower-volume exchanges that focus on privacy over profit and operate on a relatively miniscule budget.

VEXs such as Coinbase and Binance have had many years to establish their brands by building user trust (for now) and with the help of “crypto educators” encouraging newbies to buy their first assortment of tokens and coins on verification exchanges, “because it’s easy” or, more probably, because they were paid to shill those products.

You likely bought your first bitcoin on a VEX because you were told that it’s easy or were not aware of private alternatives; likewise, you probably didn’t find out about the disastrous implications of linking your real-life identity to your bitcoin stack until far later into your journey down the rabbit hole.

No need to fret, it is never too late to begin working toward a more secure and private future. Keep your bitcoin bought on VEXs wholly separate from your private bitcoin stack and stop giving VEXs your business.

Ultimately, P2P exchanges will have to work incredibly hard to compete in the same league as VEXs. Yet, without peers liquefying the order books, there would be no private, P2P exchanges at all. The best we can do is reason with users to value privacy and adjust their expectations when using P2P exchanges in lieu of high-volume, privacy-foregoing, verification exchanges.

So, spread the word!

This is a guest post by Okada. Opinions expressed are entirely their own and do not necessarily reflect those of BTC Inc or Bitcoin Magazine.