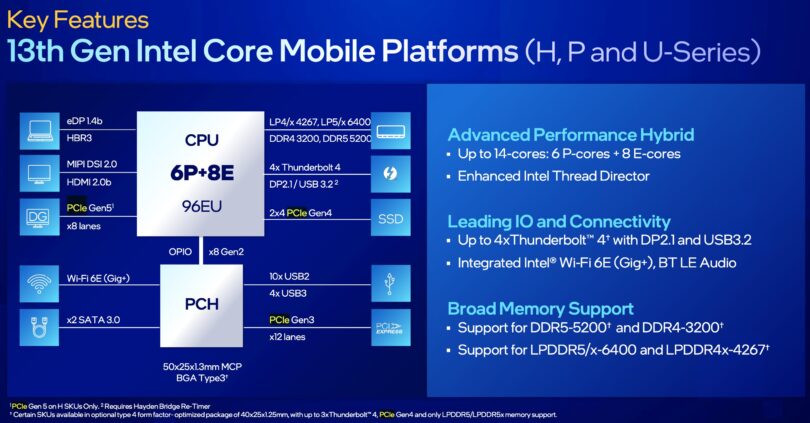 The Intel Core i3-1305U is an entry-level mobile CPU for thin and light laptops from the Raptor Lake-U series. It was announced in early 2023 and offers one performance core (P-cores, most likely Golden Cove architecture like Alder Lake) and 4 efficient cores (E-cores, Gracemont architecture). The P-cores support Hyper-Threading leading to 6 supported threads when combined with the E-cores. The clock rate ranges from 1.6 to 4.5 GHz on the performance cluster and 1.2 to 3.3 GHz on the efficient cluster. The performance of the E-cores should be similar to old Skylake cores (compare to the Core i7-6700HQ). All cores can use up to 10 MB L3-cache.

The performance should be slightly higher than the old Alder Lake Pentium 8505 (max. 4.4 GHz and 8 MB L3-cache).

The integrated memory controller supports various memory types up to DDR5-5200, DDR4-3200, LPDDR5-5200, and LPDDR4x-4267. The Thread Director (in hardware) can support the operating system to decide which thread to use on the performance or efficient cores for the best performance. For AI tasks, the CPU also integrates GNA 3.0 and DL Boost (via AVX2). Quick Sync in version 8 is the same as in the Rocket Lake CPUs and supports MPEG-2, AVC, VC-1 decode, JPEG, VP8 decode, VP9, HEVC, and AV1 decode in hardware. The CPU only supports PCIe 4.0 (x8 for a GPU and two x4 for SSDs).

The integrated graphics adapter is based on the Xe-architecture and offers 64 of the 96 EUs (Execution Units) operating at up to 1.25 GHz.

The i3 has a Base power consumption of 15 W, with 55 W being its maximum Intel-recommended Turbo power consumption. The CPU is built with a further improved 10nm SuperFin process at Intel (Intel 7).

– Range of benchmark values for this graphics card

No reviews found for this CPU (yet).