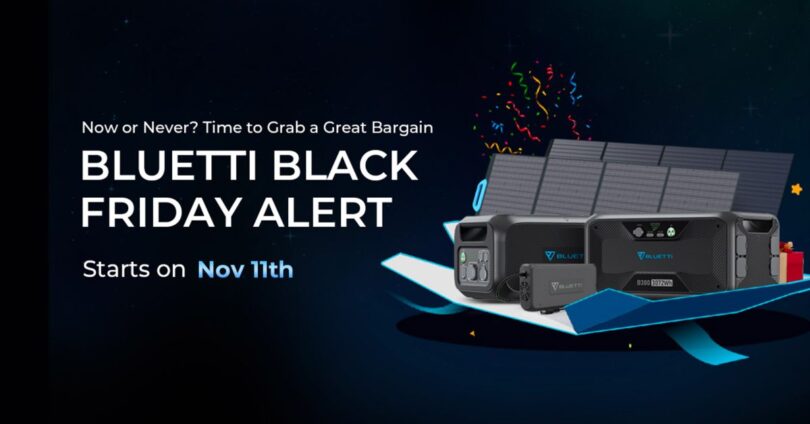 With Black Friday coming up, BLUETTI – a company specializing in energy storage products – has announced some great deals on its power stations. In addition, BLUETTI is also offering exclusive giveaways, mystery boxes, and lucky draws. This might be the best time to equip your home with an energy storage station so that you won’t have to deal with any power outages during the holidays.

BLUETTI has a variety of products available, from large stations for your home or office to more compact ones that you can take on the go.

For those who want to start with a portable power station, BLUETTI AC200P is one of the best options available. It offers a 2000Wh battery with a peak capacity of 4800W. In other words, it is powerful enough for camping and other outdoor activities, as it can power a car fridge for up to 20 hours. The AC200P also supports Fast Dual Charging by combining solar power with an AC adapter.

Customers looking for ultra portable stations should definitely take a look at BLUETTI’s EB series. The company describes it as a “must-have for campers or nature-goers to stay powered wherever and whenever they go.”

For instance, EB55 has a capacity of 537Wh, which is enough to give multiple recharges to devices such as phones, tablets, and laptops. The EB70S, on the other hand, can power up to 12 devices simultaneously with DC or AC outputs. A single charge is enough to power a television for up to eight hours.

People looking for a modern, modular option with high capacity may prefer the new AC500 & B300S, which supports 5000W of power and can be combined with expansion batteries to provide up to 18432Wh of capacity. It also supports 3000W input from solar panels and can be recharged from 0 to 80% in just one hour.

With 16 outlets and a 3000W inverter, AC300 can also be expanded with four batteries, totaling 12288Wh capacity. This model works well as a backup for the home power system or even for camping, as it can power things like a washing machine, TV, or fridge for up to five hours.

In addition to the Black Friday discounts, customers who purchase BLUETTI products through November 29 are eligible for a lucky draw to win multiple prizes, including power stations and gift cards worth up to $100. There are also additional giveaways depending on what you buy – for instance, a $5000 purchase gets you a Mini Fridge.

There are even mystery boxes that offer random generators and accessories for very low prices. Of course, in order to take advantage of these Black Friday offers, all purchases must be made through BLUETTI’s online store.