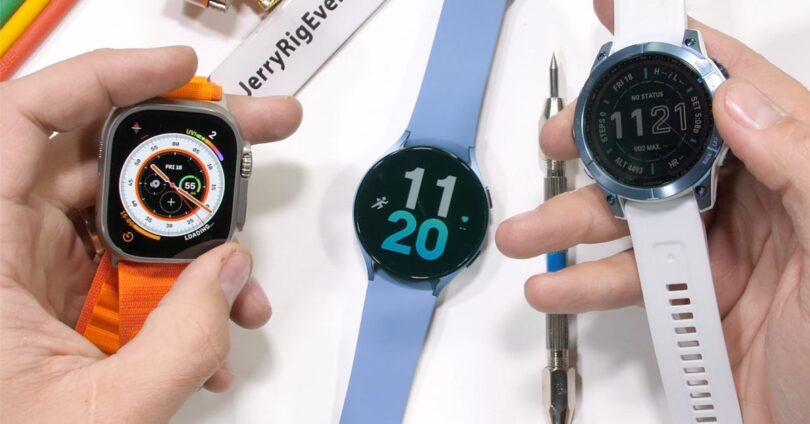 Does the Apple Watch Ultra have a display covered by pure sapphire?

The YouTuber, who’s known for doing durability tests with electronic devices, has posted a new video in which he measures the hardness of the sapphire cover of the Apple Watch Ultra as well as Samsung’s Galaxy Watch 5 and Garmin Fenix 7. The main purpose of the test was to find out if these three watches in fact have sapphire crystal as promoted by the companies.

As explained by Zack (who runs the YouTube channel), sapphire is a material with a hardness level close to diamond. Using the Mohs scale, which measures the hardness of minerals from 1 to 10, the YouTuber shows how scratch resistant the screens of devices such as phones and smartwatches are. While glass scratches at level 6, sapphire scratches at level 8 or even 9 depending on how pure it is.

Apple claims to use sapphire material in its devices since iPhone 5, which was the first to have sapphire cover on the camera lens. However, what Apple actually uses is a sapphire composite material, which is not as hard as pure sapphire. But what about Apple Watch Ultra?

JerryRigEverything’s tests show that the Apple Watch Ultra’s display is in fact covered by real sapphire, but there are a few things to keep in mind. In the tests, the sapphire crystal on the Apple Watch Ultra had minor abrasions at levels 6 and 7, while the real damage starts at level 8.

How it compares to other smartwatches

The results were similar with the Galaxy Watch 5, although the abrasions at levels 6 and 7 were less visible than on the Apple Watch Ultra. The YouTuber explains that this is probably due to impurities in the material or polishing issues. As for the Garmin Fenix 7, tests show that it has the purest sapphire crystal of the three watches, as it barely had abrasions at levels 6 and 7.

But in conclusion, neither Apple, Samsung, nor Garmin are lying when they say that their watches have sapphire crystal – although the screen of the Apple Watch Ultra seems to be a bit more susceptible to scratches than the screen of other watches. You can watch JerryRigEverything’s full video below:

Apple Watch Ultra costs $799 in the US, but you can buy it for less on Amazon.