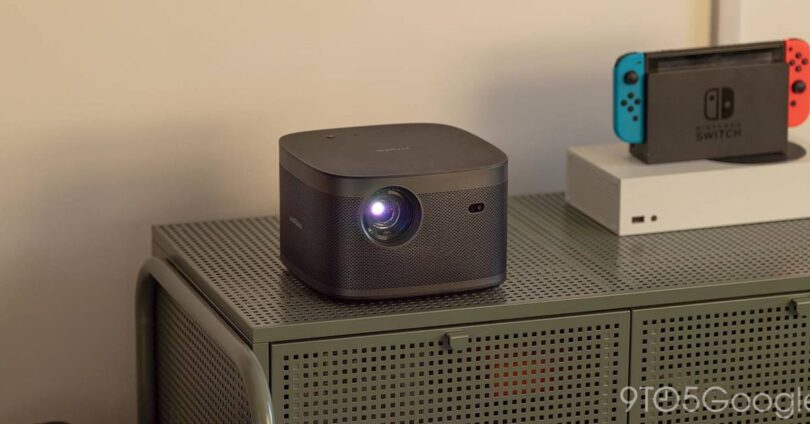 Getting a high-quality 4K video projector is easier than it has been in recent years thanks to options like the Xgimi Horizon 4K Pro, which offers a full suite of features in a fairly compact package.

Building your home entertainment system around an Android TV setup such as the XGIMI Horizon Pro 4K is easy to recommend unless you’re a true audiovisual nerd. The maximum supported resolution is C4K 4,096 x 2,160) but the output resolution is 3,840 x 2,160 or consumer 4K UHD. This is absolutely perfect for almost all 16:9 content on the internet or broadcast via aerial or satellite. It’s important to note this as there are two HDMI 2.0 ports at the rear for you to hook up other devices.

Alongside those HDMI ports, you have access to two USB 2.0 ports, an optical out and a headphone jack. There’s also the big bonus of a built-in Chromecast for streaming content from smartphones, laptops, or other compatible devices. This is also important if you use a particular video streaming service, but we’ll discuss this later on. The only other notable addition is that of an ethernet port for wired data connections.

For those wondering about specifications, the XGIMI Horizon Pro 4K comes with 2GB of RAM and 32GB of onboard storage and utilizes a Single Chip DLP. It runs smooth and slick with plenty of storage to sideload just about any apps you could want or need. However, you won’t be able to store a ton of 4K or 1080p movies and TV shows. Luckily, plugging in a USB stick for extra storage solves this right away, but is something I haven’t done at this stage.

As for the lamp life, it’s rated at 25,000 hours. Which would equate to around 1,042 days of constant usage, which will likely be more than enough for a long lifespan without the stress of needing to replace the projection lamp. At 2.9 kg, it’s a hefty unit to boot, but it’s sturdy and has a metal and plastic construction that feels well crafted or “premium.”

As with just about any Android TV device, the setup process is a breeze — or at least it has been, given my knowledge of the system. It is running Android TV 10.0 and syncing your Google account with your Android phone is the quickest way to get logged in. Complaints aside, the process is very quick and painless with thorough step-by-step information at all stages.

Initially, the XGIMI Horizon Pro will take over to focus after you’ve pointed the projector toward a wall or screen. There is an integrated AI that adjusts and reframes the projected image to ensure nothing obstructs the picture — think ornaments, wall hangings, plants, things like that.

I tried placement in a few areas but found that fixing to the top of a monopod meant I could place it behind my couch and have a “proper” cinema setup of sorts. This is the biggest problem with the various projectors and likely the reason you may never consider one for your home entertainment needs. Finding just the right place without obstructions can be, understandably, difficult.

Really the only way to get the “perfect” or “optimum” picture is to have the projector at 90 degrees to your wall or screen. You can’t really fight physics, but the keystone correction will level as much as possible up to around 45 degrees. This detrimentally affects the projected image, so it’s only something I’d personally suggest if you have nowhere else to put the Horizon Pro.

Coming from the tiny Chromecast with Google TV, the long XGIMI remote is great for those with large hands. It’s just a good, well-laid-out control, and it’s a breeze to figure out even for novice Android TV users. I like that the Google Assistant button is more centrally placed as I don’t accidentally press it when picking up or, as happens most often, sit on it and activate unnecessary voice commands.

The buttons are a little mushy, but the brushed aluminum finish and weight make this a great remote. Although the rear “eject” button for the battery slot access can fire batteries out and scatter them around. I have thought about putting tape over this button to prevent it from happening, and it somewhat ruins the remote for me. It’s not horrendous, but it can be an annoyance.

In terms of image quality, it’s important to note that I did not use a dedicated projector screen. This does mean that my experience is a little bit mixed and has me thinking about getting a projector screen setup to take advantage of what is still a solid 4K image overall.

You’re not offered a ton of options for image tweaking beyond the “Movie,” “Sports,” “Office,” and “Game” presets. I had to disable the MEMC smoothing in the “Movie” mode as this upscales everything to 60Hz and is frankly awful. It gives that soap opera effect to just about everything you’re consuming and totally not worth enabling.

XGIMI claims that the Horizon Pro 4K has a maximum brightness of 2200 ANSI lumens. Without being able to directly measure this, I can’t say for certain, but I don’t think it gets quite as close as that proposed brightness level. It’s still fairly bright for a portable projector such as this, but daylight viewing is still something that is hard to suggest and tough to enjoy.

Luckily, I have blackout blinds, or at least they were sold to me as such. Viewing in a darkened room is delightful. Colors really start to “pop” and some of the contrast issues in poor or bright lighting all but disappear. I love watching classics like The Thing, Blade Runner 2049, or the fairly recent Dune on a large cinema-style screen at home, and it does justice for someone (just about) too young to have seen either movie in theaters.

There are some issues with extra noise or artifacts with HD pictures, but I found that the dedicated noise reduction feature in the “Custom image” mode helped clean things up marginally. Native 4K content streamed from services such as Amazon Prime video proved to be much better. The extra sharpness and image vibrancy really bump this way above the admittedly limited pool of Android TV projectors that I have tried and tested before — most of which are capped at just 720p but do an admirable job given the minute form factors.

It is worth noting that even though this is a “4K” projector, the XGIMI Horizon Pro uses four-phase pixel shifting to produce a 4K picture. If that worries you, fear not as even side-by-side with a dedicated 4K TV set, I could not see any difference. Everything is as sharp as you would expect for crystal-clear viewing.

Playing the soon-to-be-defunct Google Stadia and Nvidia GeForce NOW, the input latency of almost 40ms was a worry, but I found it to be acceptable. I wouldn’t suggest this projector as a dedicated point of access for cloud gaming but when hooked up to a PS4 the latency at least appeared to be less noticeable — not that it was immediately obvious even when playing Stadia or GeForce NOW to be a massive concern for casual gamers like myself.

Gaming proved just fine for my limited playtime but even though some marketing material touts Android TV with a prominent Netflix logo on the homescreen, the app isn’t officially available on the XGIMI Horizon Pro. That proved especially annoying and resulted in some frustrating but ultimately rewarding workarounds using the popular streaming hub Kodi to enable Netflix binges. It’s not a proper solution, but you can watch Netflix shows with a little bit of work.

The in-built speaker is excellent given the entire package is no bigger than most game consoles. The two 8W integrated Harman Kardon speakers put the many cheap TV soundbars that I have used to shame. The sound is full and clear, which is great if you don’t have access to a dedicated surround sound system. I tried using as a Bluetooth speaker on a few occasions and that was similarly a pleasant experience. I can’t fault the integrated audio as there are obvious hardware and audio limitations based upon size/cost here.

Being able to just plonk the XGIMI Horizon Pro projector down and have a fully integrated 4K entertainment system with all the benefits of Android TV is an enticing one. I can’t foresee myself ditching my 4K UHD OLED TV in favor of this diminutive projector, but for quick entertainment, a 300-inch screen in your living room is something I really do enjoy when trying to mimic the movie theater experience.

Where it shines for me is live sports and when hosting family gatherings. I’ve taken the XGIMI Horizon Pro 4K to BBQs and propped up on a tripod for garden music video playback and even broadcast the latter stages of the delayed UEFA Euro 2020 tournament last year on the side of a garage wall — which proved to be a fantastic experience. Rather than being the entertainment hub of my home, it has become the perfect bedroom screen that takes up little to no space and gives a pleasing overall image.

At $1,699, the XGIMI Horizon Pro 4K projector hovers around the same price as many exceptional 55-inch+ OLED TVs. Because of that, it’s hard to suggest that anyone build their entire home entertainment system around one unless you do not have room or the option of a large screen. If you want a level of portability and the excellent experience that is Android TV with a couple of caveats, then it’s a great package even though it is a little pricey.

You can get the XGIMI Horizon Pro 4K projector at several online retailers including Amazon, Best Buy, Target, and more.