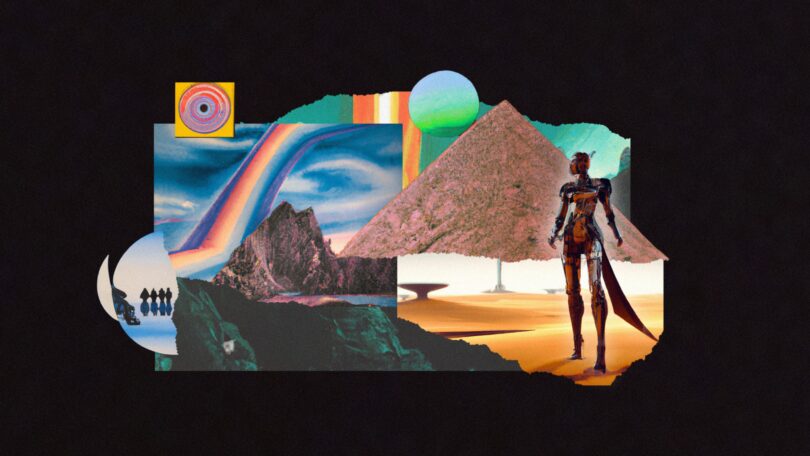 Sometimes we stumble upon insight in unexpected places. Late last year, for example, I read perhaps the most precise description ever written about AI-generated art in The New York Times comments section. The article described what happened when a man named Jason Allen submitted an image generated by the AI program Midjourney to an art contest and won. (Long story short: Artists got mad.) While the story focused on the debate over the ethics of AI image generators, the comment had nothing to do with thorny moral considerations. Instead, it described how the winning work looked. “Congratulations to Mr. Allen on coaxing an algorithm to spit out an image that looks like a 1970s prog rock album cover,” it read. The commenter’s handle? Cynical Observer.

Cynical, maybe. Observant, definitely. “Like a 1970s prog rock album cover” is a perfectly pithy way to convey what this new generative AI art scene frequently mimics. Allen’s winning entry resembles a French neoclassical painting with a sci-fi twist. Womanly figures in flowy sienna and white robes stand in a vast ornate chamber with a vaguely alien cityscape in the background. It’s not offensive or anything—calling it “moderately groovy” is apt—but let’s just say the first-place award would make more sense if the judges of the art contest were, like, all the remaining living members of Jethro Tull.

In the past year, a slew of AI image generators have whipped up a galactic amount of buzz. Trained on vast data sets containing billions of images hoovered up from across the internet—animated stills, iconic photographs, the work of artists living and dead, memes, screenshots, selfies, even porn—these programs produce images that can look disconcertingly close to what a human might make, give or take a glitchy hand or two. Midjourney (and similar programs like Stable Diffusion and Dall-E) has provoked awe, anxiety, anger, and questions: Will this AI take jobs from artists? Where does copyright law land? Can machines ever truly produce something original? Should I feel guilty for making a picture of Tony Soprano having a cappuccino with Shrek and sharing it with my group chat?

All good questions, ones people will likely be vehemently debating for years. Lost amid the hype and hand-wringing, though, is another query: Why does so much AI art look like it could be on a ’70s prog-rock album cover?

The good news is, I’m a journalist, so I went ahead and asked some artists, researchers, and art critics what they made of the aesthetics of AI art. First up, I called Amelia Winger-Bearskin, an artist and professor at the University of Florida. Winger-Bearskin has been cataloging different visual trends she’s noticed in recent AI art. She calls one trend Nightmare Corp.—often exemplified by images conjured by Google’s Deep Dream, an older generator released in 2015. It specializes in swirling, psychedelic imagery, like memories from an especially harrowing acid trip. “Prog-rock influences, for sure,” she says. Another category Winger-Bearskin explores, which she calls Dada 3D, sounds a lot like the goofy scenes I prompt when I play around with these generators. She describes it as “something like a surrealist parlor game.”

Aside from taxonomizing trends, Winger-Bearskin has noticed broader stylistic tics in these generators. She sees Disney-style Western animation and anime as obvious influences, as well as a tendency to treat whiteness as the default race—a result, she suspects, of training these generators on data sets that are heavy on Disney-style Western animation, anime, and images of white people.

Lev Manovich is paying close attention, too. The cultural theorist and professor at the City University of New York has been lurking in Midjourney’s Discord server since last year, analyzing how people use the generator. After Midjourney released an update last fall, he saw some changes in what people were prompting the generator to make. After it got better at representing humans realistically, for instance, requests for portraits of both men and women went up.

Digital artist Sam King first started closely following the AI art scene in 2021. Excited by what they saw, they started sharing their favorite images on social media, building a following as a curator just as the technology took off. They describe the earlier wave of generators as favoring “trippy, abstract stuff.” (These generators are known as generative adversarial networks, or GAN. I’ve seen a few people call this look, rather uncreatively, GANism.)

King sees the newest wave of generators, called diffusion models, as stylistically distinct. Just as oil painting and watercolors produce recognizably different effects, GAN generators and diffusion generators produce recognizably different images. If you want a more realistic rendering of, say, Tony Soprano having a cappuccino with Shrek, the diffusion models are more likely to produce convincing results. “In theory, you can make all kinds of different aesthetics with these machines,” they say. More realistic doesn’t necessarily mean more stylistically varied, though. Like Winger-Bearskin, King sees Disney and anime influences cropping up frequently, as well as comic book art.

“The rhetoric from these companies is that you can make anything you can imagine. It’s about this open frontier. But, of course, popular culture follows particular stereotypes and tropes,” Manovich says. He sees variations on several themes again and again: “​​Fantasy, fairytale, comic book, video game.”

Manovich pointed out that the type of people who gravitate toward these programs heavily shape what gets produced through their personal taste and preferences. Midjourney’s Discord, for example: “Very dominated by male users.” That tracks with how King described what they’ve seen coming out of Midjourney: “Loads of depictions of women with blank expressions on their faces, where they look kind of sexy.”

Is every single piece of AI art inherently hokey or boring? No. But it is striking that we’ve developed these startlingly powerful tools for conjuring visual representations of our wildest dreams and we’re producing male geishas and space princesses. It can feel like watching people play “Chopsticks” over and over on a Steinway Model D grand piano. There are already stereotypes forming about what AI art looks like; an artist was recently banned from a Reddit forum because their work simply looked like it was AI-generated. (It was not.) “You need to find a different style,” the moderator said. It may not surprise you to hear that the image in question, showing a beautiful woman in a flowy robe surrounded by birds and red eyes in the sky, looks for all the world like it could be a prog-rock album cover.

But here’s a nice thought: Although AI image generation may never move beyond the ersatz, it could still lead to actual artistic breakthroughs. Art critic Mike Pepi isn’t impressed by how people are using the current generators. “Right now, when you go on Midjourney or DALL-E and you type in something and it ends up looking really cool—and it was just you messing around on your computer—clearly, there’s not a lot of authorial intent there. That’s not a real reflection of you as an artist,” he says. Still, he doesn’t rule out the possibility that these generators can aid genuine artistry if used judiciously. “What could be interesting is an artist who is using these tools as one step in a grander assemblage, like a movie director or conceptual artist. That’s where you have the capacity for human creativity to best employ these tools,” he says.

Meanwhile, Winger-Bearskin likes to imagine that generative AI’s greatest aesthetic achievement might be inadvertent. This moment reminds her of the advent of photography, when many painters feared the new technology would make them obsolete. “People said, OK, that’s the death of painting, because now people will just be able to reproduce portraits perfectly using this machine,” she says. “But that led to the explosion of impressionism and abstract expressionism and all of these other forms of painting, because we realized that painting didn’t have to represent something.”

In the same vein, Winger-Bearskin thinks this moment could spur artists to react against generative AI—or use it subversively—to create genuinely original work. I love this idea. Imagine: After all this technological progress and hype, the most exciting achievement of these generators could be inspiring artists to react against them. It makes sense. After all, without prog rock, there would be no punk.