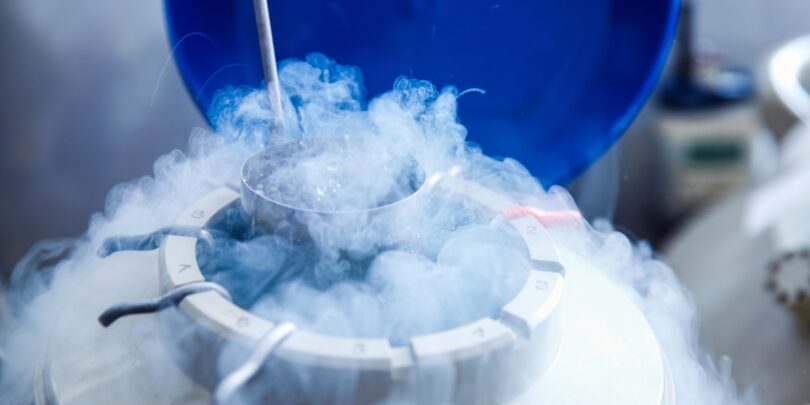 This article is from The Checkup, MIT Technology Review’s weekly biotech newsletter. To receive it in your inbox every Thursday, sign up here.

Peter Zhu was just 19 years old when he died following a skiing accident in West Point, New York. His donor card made clear he had wanted to donate his organs. But his parents wanted to collect his sperm, too.

His parents told a court that they wanted to keep the possibility of using the sperm to eventually have children that would be genetically related to Peter. The court approved their wishes, and Peter’s sperm was retrieved from his body and stored in a local sperm bank.

We have the technology to use sperm, and potentially eggs, from dead people to make embryos, and eventually babies. And there are millions of eggs and embryos—and even more sperm—in storage and ready to be used. When the person who provided those cells dies, like Peter, who gets to decide what to do with them?

That was the question raised at an online event held by the Progress Educational Trust, a UK charity for people with infertility and genetic conditions, that I attended on Wednesday. The panel included a clinician and two lawyers, who addressed plenty of tricky questions, but provided few concrete answers.

In theory, the decision should be made by the person who provided the eggs, sperm or embryos. In some cases, the person’s wishes might be quite clear. Someone who might be trying for a baby with their partner may store their sex cells or embryos and sign a form stating that they are happy for their partner to use these cells if they die, for example.

But in other cases, it’s less clear. Partners and family members who want to use the cells might have to collect evidence to convince a court the deceased person really did want to have children. And not only that, but that they wanted to continue their family line without necessarily becoming a parent themselves.

Sex cells and embryos aren’t property—they don’t fall under property law and can’t be inherited by family members. But there is some degree of legal ownership for the people who provided the cells. It is complicated to define that ownership, however, Robert Gilmour, a family law specialist based in Scotland, said at the event. “The law in this area makes my head hurt,” he said.

The law varies depending on where you are, too. Posthumous reproduction is not allowed in some countries, and is unregulated in many others. In the US, laws vary by state. Some states won’t legally recognize a child conceived after a person’s death as that person’s offspring, according to the American Society for Reproductive Medicine (ASRM). “We do not have any national rules or policies,” Gwendolyn Quinn, a bioethicist at New York University, tells me.

Societies like ASRM have put together guidance for clinics in the meantime. But this can also vary slightly between regions. Guidance by the European Society for Human Reproduction and Embryology, for example, recommends that parents and other relatives should not be able to request the sex cells or embryos of the person who died. That would apply to Peter Zhu’s parents. The concern is that these relatives might be hoping for a “commemorative child” or as “a symbolic replacement of the deceased.”

The people who want to use the eggs, sperm or embryos of dead partners or family members are often painted as “selfish”, but, in James Lawford Davies’s experience, that just isn’t the case. Lawford Davies, a UK-based solicitor specializing in reproductive and genetic technologies, has been involved in several similar cases. “All of these cases have involved incredibly brave people who have been faced with tragedy,” he said. The people involved all wanted to deliver on the wishes of those who had died, he added.

Posthumous reproduction is undoubtedly a murky area, but there’s one thing that everyone I’ve heard and spoken to agrees on: each case is unique, and should be treated individually. “It’s hard to generalize,” says Shelly Simana, a bioethicist and legal scholar at Stanford University in California.

Simana wants more people to start thinking about the possibility of their own eggs, sperm and embryos being used after their death. In the same way that we’re encouraged to consider organ donation, we should all be writing down whether we’d be happy to have our sex cells retrieved and used, she says. “Ideally we’d have people write a biological will,” she says.

Quinn agrees. “We often tell people that Thanksgiving… when you’re sitting with your family… is a good time to express your wishes,” she says. “They are very hard conversations to have…Talking about death isn’t comfortable for a lot of people, but how else will you make your wishes known?”

To read more about the latest in reproductive technology, check out these stories from Tech Review’s archive:

There’s a race to create egg and sperm cells in the lab—a technique that could potentially solve infertility problems and allow more people to have children that are genetically-related to them.

I’ve also written about how advances in reproductive technology could lead to babies with four or more biological parents—forcing us to reconsider parenthood.

Earlier this year, scientists found a way to mature eggs from transgender men in the lab—which could offer them new ways to start a family.

Another team have used similar techniques to help create embryos from immature eggs of transgender men, taking the technology a step further.

And then there’s the technology that uses material from three genetic “parents” to create an embryo. Here’s Emily Mullin’s 2017 profile of the startup trying to commercialize “three-parent” babies.

From around the web:

How much would you pay to see a woolly mammoth? My colleague Antonio Regalado spoke to Sara Ord, director of species restoration at Colossal, who plans to revive extinct animal species and showcase them in zoos. (MIT Technology Review)

Offering freedom to people with Alzheimer’s disease might improve their symptoms, as well as providing them with a better quality of life, according to staff at this French dementia village. (The New Yorker)

Are you still taking precautions against covid-19? Here’s what the experts are doing, nearly three years into the pandemic. (STAT)

We’re better prepared for covid this winter compared to last year, say Anthony Fauci and Ashish Jha—as long as we keep up with vaccinations. (The New York Times)