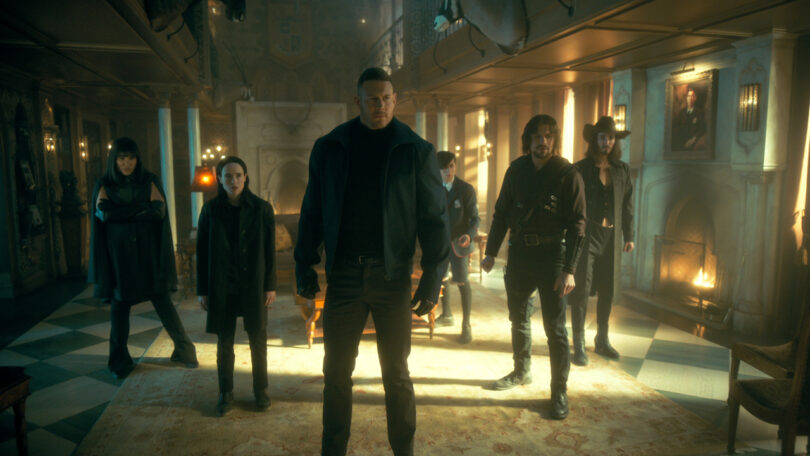 Netflix appears to be counting down to an Umbrella Academy season 3 trailer reveal – and a batch of new character posters may hold the key to its release date.

By now, fans will know that The Umbrella Academy season 3 will launch on Netflix on Wednesday, June 22. But, aside from a very brief teaser that accompanied the third season’s official release date, we’re yet to see any footage ahead of the Netflix show‘s return.

That, though, could be about to change. Netflix has started to ramp up its season 3 promotional campaign, with the streaming giant releasing new artwork, making new cast announcements, and confirming Elliot Page’s Vanya Hargreeves will come out as transgender in the show’s next instalment (opens in new tab).

On Friday, April 8, two new one-sheets where released on The Umbrella Academy’s official Twitter account. The posters, which you can see above, showed off Page’s Viktor Hargreeves and Christopher, The Sparrow Academy’s floating psykronium cube. These are the characters who are referred to as ‘Number Seven’ by their siblings and father Sir Reginald Hargreeves.

Three days later on Monday, April 11, Netflix released another pair of character posters. These images showed off individuals referred to as ‘Number Six’, aka The Sparrow Academy’s Jayme and, well, a poster that simply reads “This post has been removed from the timeline”.

The second one-sheet is a reference to The Umbrella Academy’s Ben Hargreeves, who gave his life (again) to save his brothers and sisters in season 2 episode 9. You can view the latest poster duo below.

Given how popular Ben was as a character, it’s unsurprising that Umbrella Academy fans feel a tad emotional over this latest poster reveal. In our view, though, that’s Netflix’s way of distracting us from the real story here: that these posters are counting down to an official trailer reveal.

Put simply, three days separated the release of posters for Viktor/Christopher and Jayme/Ben. If Netflix has adopted a strategy whereby it releases new character posters every three days, the next pair should arrive on Thursday, April 14. Those posters will be for individuals named ‘Number Five’ – i.e. Aidan Gallagher’s ‘Five’ and Genesis Rodriguez’s Sloan.

If that’s the case, we predict that the other four pairs of posters will also be released every 72 hours, giving us the below release dates:

Providing that we’re right, there are two possible dates that The Umbrella Academy season 3 trailer could arrive.

The first is a day after the final pair of posters are revealed, meaning the trailer would drop on Wednesday, April 27. Alternatively, Netflix could continue its three-day release strategy and deliver the trailer on Friday, April 29.

Either way, the trailer’s potential arrival would be less than two months – only just, mind you – before season 3 officially launches. That trailer release strategy would be similar to other fan favourite Netflix shows including Ozark season 4. The crime drama’s first trailer landed online on November 17, 2021, just over two months before the first part of season 4 arrived on Netflix on January 21, 2022.

However, Stranger Things season 4 part 1, which will be released on May 27, will receive its official trailer today (Tuesday, April 12). That’s just over six weeks before it lands on Netflix, so the streaming giant’s trailer release strategy varies from time to time.

Still, based on our theory, we’re fairly confident that we’ll see The Umbrella Academy season 3 trailer before the end of this month. We don’t have any insider information on when it’ll land, though, and our hypothesis could be proved incorrect if the next two posters aren’t released on April 14. If they are, though, we suggest that you buckle up for the official trailer’s late April release.

As TechRadar’s entertainment reporter, Tom covers all of the latest movies, TV shows, and streaming service news that you need to know about. You’ll regularly find him writing about the Marvel Cinematic Universe, Star Wars, Netflix, Prime Video, Disney Plus, and many other topics of interest.

An NCTJ-accredited journalist, Tom also writes reviews, analytical articles, opinion pieces, and interview-led features on the biggest franchises, actors, directors and other industry leaders. You may see his quotes pop up in the odd official Marvel Studios video, too, such as this Moon Knight TV spot (opens in new tab).

Away from work, Tom can be found checking out the latest video games, immersing himself in his favorite sporting pastime of football, reading the many unread books on his shelf, staying fit at the gym, and petting every dog he comes across.

Got a scoop, interesting story, or an intriguing angle on the latest news in entertainment? Feel free to drop him a line.