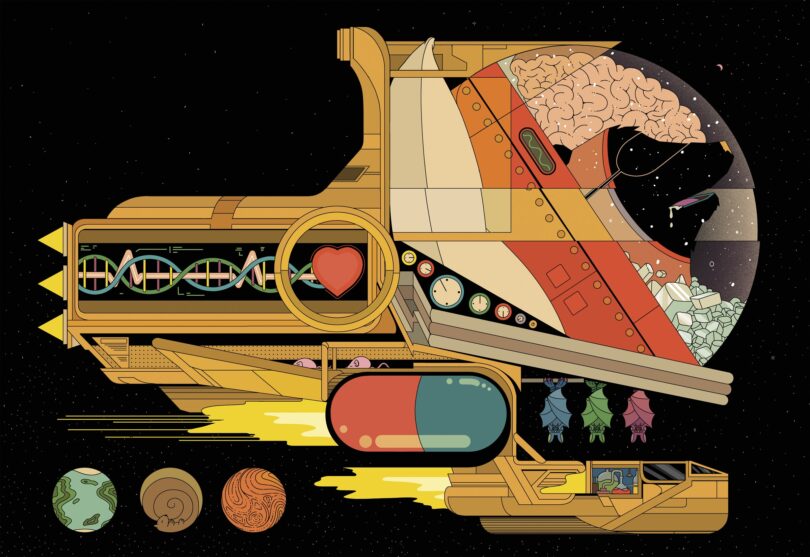 One day in 1992, near the northern pole of a planet hurtling around the Milky Way at roughly 500,000 miles per hour, Kelly Drew was busy examining some salmon brains in a lab. Her concentration was broken when Brian Barnes, a zoophysiology professor from down the hall at the University of Alaska Fairbanks, popped by her bench for a visit. With a mischievous grin, he asked Drew—a neuropharmacologist early in her career—to hold out her hands and prepare for a surprise. A moment later, she felt a hard, furry lump deposited in her palms. It was some sort of brown rodent with dagger-like claws, curled up into a tight ball and so cold to the touch that Drew assumed it was dead. To her astonishment, Barnes gleefully explained that it was actually in perfect health.

The creature, an Arctic ground squirrel, was just hibernating, as it does for up to eight months of the year. During that span, the animal’s internal temperature falls to below 27 degrees Fahrenheit, literally as cold as ice. Its brain waves become so faint that they’re nearly impossible to detect, and its heart beats as little as once per minute. Yet the squirrel remains very much alive. And when spring comes, it can elevate its temperature back to 98.6 degrees in a couple of hours.

Drew cradled the unresponsive critter in her hands, unable to detect even the faintest signs of life. What’s going on inside this animal’s brain that allows it to survive like this? she wondered. And with that question, she began to burrow into a mystery that would carry her decades into the future.

At this point, in the year 2022, no fewer than three major entities—NASA, the Chinese National Space Administration, and SpaceX—are vying to put the first human on Mars by 2040 or so. To win that race, a team must first solve a series of vexing design riddles. As an executive at SpaceWorks, an Atlanta-based engineering firm that tackles ambitious research projects for NASA, John Bradford has spent the past decade running the brutal math on one of them.

Unfortunately for the engineers trying to get humans to the Red Planet, we’re a pretty high-maintenance species. As large endotherms with active brains, we burn through copious amounts of food, water, and oxygen in our daily quest to survive. All that consumption makes it extra hard to design a spacecraft light enough to reach—and eventually return from—a planet some 140 million miles from our own. Based on the eating habits of the astronauts aboard the International Space Station, for example, a crew of four will need at least 11 tons of food to complete an 1,100-day mission to Mars and back. Those meals alone would weigh nearly 10 times more than the entire Perseverance rover, the biggest payload ever to reach the Martian surface. Add in all the other life-support essentials, to say nothing of the engines and the tools necessary to set up camp, and the weight of a fully fueled Mars-bound ship could easily exceed 330 tons as it departs Earth’s atmosphere—more than two fully grown blue whales. It’s nearly impossible to see how a vessel that massive could generate the power necessary for its entire round-trip journey.

The obvious solution to this problem—at least to anyone who’s read any Arthur C. Clarke novels or watched Stanley Kubrick’s 2001: A Space Odyssey—is to slow the metabolism of crew members so they only need to ingest a bare minimum of resources while in transit. In 2001, astronauts lie down in sarcophagus-like hibernation pods, where their hearts beat just three times a minute and their body temperature hovers at 37 degrees Fahrenheit. Bradford has devoted a huge chunk of his 21-year career at SpaceWorks to investigating a question that Kubrick had the artistic license to ignore: How, exactly, can we safely power down a human body so it’s just one step removed from death, then revive it on demand?

Early on in his research, Bradford glimpsed some promise in therapeutic hypothermia, a medical technique in which people who have experienced cardiac arrest are chilled—typically with intravenous cooling fluids—until their internal temperature reaches as low as 89 degrees Fahrenheit. This decreases their metabolism so much that their cells can function on roughly 30 percent less oxygen and energy—a lifesaver for a damaged body that’s struggling to heal amid reduced blood flow. Patients are usually kept in this hypothermic state for only a day or two, mostly because the cold triggers intense shivering that must be controlled with powerful sedatives and neuromuscular-blocking drugs. But Bradford identified a few rare cases in which patients were kept hypothermic for as long as two weeks. “And we started asking, why can’t you do that for longer?” he says. “How long can you sustain that comatose-like state?”

Bradford was wary of going public with his curiosity, fearing he’d be branded a crank for suggesting astronauts be put on ice—a concept uncomfortably similar to the one touted by the dubious cryonics industry. But in 2013 he persuaded NASA’s Innovative Advanced Concepts program to fund a project assessing the feasibility of “human torpor.” His successful pitch centered on the potential weight savings: He estimated that if astronauts could be kept frigid for the bulk of their trip to Mars, the mass of their life-support resources could be cut by as much as 60 percent. Bradford also hypothesized that torpor could help astronauts fend off a number of serious health hazards, ranging from radiation to the psychological perils of extreme boredom and isolation. (“You’re in the blackness of space, you don’t have real-time communications,” he says. “A lot of people will say, ‘Oh, I’ll just read a lot of books.’ But I think that will get old quick.”)

Yet as Bradford and his team dug into the minutiae of therapeutic hypothermia, they steadily soured on the technique. There seemed to be no getting around the fact that the drugs used to control shivering also stop respiration. Torpid astronauts would have to be intubated, meaning they’d have to spend weeks or months breathing through tubes shoved down their tracheas. Bradford also balked at the number of needles required to keep the IV fluids flowing, a situation that seemed likely to increase the odds of infection.

The dream alternative was for astronauts to be able to swallow a pill, then lie down for a long and chilly slumber during which they could breathe on their own. It seemed a fantastical proposition, but aspects of it struck Bradford as familiar. There are, after all, scores of species that go torpid every winter, drifting into an unconscious state that drastically squelches their bodies’ cravings for food and air. When they rapidly whirr back to life in spring, these creatures show no signs of suffering from muscle atrophy, malnourishment, or other ailments that might be expected to stem from lengthy spells of idleness. Bradford suspected there might be useful wisdom to be gleaned from understanding how such animals switch into low-power mode when their environments turn harsh.