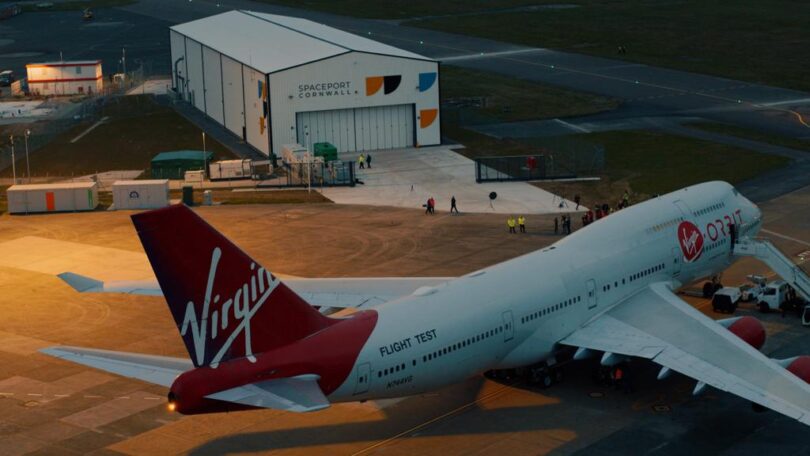 Virgin Orbit’s historic “Start Me Up” mission launched from Spaceport Cornwell on January 9th as planned, but it has failed to reach orbit and has ultimately ended in failure. If you follow the the company’s tweets during the event, everything went well at first. Virgin Orbit confirmed LauncherOne’s clean separation from its carrier aircraft, Cosmic Girl, as well as the ignition of its NewtonThree first stage rocket engine. The mission also seemed to have gone through a successful stage separation, with the company tweeting about NewtonFour’s, the second stage engine’s, ignition. “LauncherOne is now officially in space!” the tweet after that reads.

LauncherOne’s upper stage shut down and was supposed to coast halfway around our planet before deploying its payload. As Ars Technica reports, the next tweet after that said the rocket and its payload satellites had successfully reached orbit. But the company deleted that tweet and replaced it with an announcement that said an anomaly prevented the mission from reaching orbit as planned. According to Reuters, a graphic display it saw over the launch’s video feed showed that the mission reached second-stage cutoff but stopped three steps ahead of payload deployment a couple of hours after take off.

Matt Archer, Commercial Space Director at the UK Space Agency, said the government and various entities that include the company will conduct an investigation about the failure over the coming days. Archer also said that the second stage suffered a “technical anomaly and didn’t reach the required orbit.” It’s unclear what the investigation entails, but Virgin Orbit promised to share more details when it can. Meanwhile, Cosmic Girl and its crew was safely able to return to Spaceport Cornwall.

We appear to have an anomaly that has prevented us from reaching orbit. We are evaluating the information.

The mission was carrying payload satellites from seven commercial and government customers. They include a UK-US joint project called CIRCE (Coordinated Ionospheric Reconstruction CubeSat Experiment) and two CubeSats for the UK Ministry of Defense’s Prometheus-2 initiative. Ars says this failure could have a huge impact on the company, which is struggling to launch enough missions to break even. “Start Me Up” wasn’t only the first orbital launch from UK soil, it was also the first international launch for Virgin Orbit and the first commercial launch from Western Europe. It could’ve been a high-profile success for the company and would’ve shown potential customers what it’s capable of.

Dan Hart, Virgin Orbit CEO, said in a statement sent to Engadget: “While we are very proud of the many things that we successfully achieved as part of this mission, we are mindful that we failed to provide our customers with the launch service they deserve. The first-time nature of this mission added layers of complexity that our team professionally managed through; however, in the end a technical failure appears to have prevented us from delivering the final orbit. We will work tirelessly to understand the nature of the failure, make corrective actions, and return to orbit as soon as we have completed a full investigation and mission assurance process.”