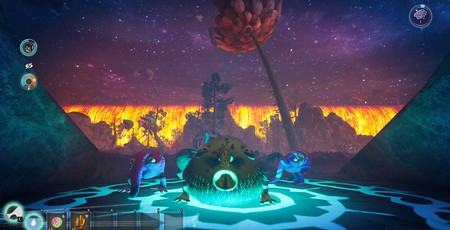 The Eternal Cylinder is without doubt without a doubt the weirdest game I’ve played this year. It’s a game in which you play a sentient trunk which is hunted by giant mouths and hybrid car people, all while being relentless pursued by an enormous planet-crushing cylinder. It’s a fascinating experience, simultaneously charming and terrifying, blending incredible art with themes of living among ecological disaster. It isn’t quite a brilliant game, but even in its weakest moment, it’s never less than captivating.

That sentient trunk I mentioned is actually called a trebhum, a squat little alien born into a world that slowly being crushed into dust by an unstoppable cylinder that stretches all the way across the horizon. I’m not quite sure how this works geometrically, although this is quite far down the line of logical hurdles that The Eternal Cylinder leaps over with gay abandon. Your broad goal is to survive, but The Eternal Cylinder isn’t structured like other survival games. The cylinder’s omnipresence across a whole axis of the world forces the game into a more linear mode than most survive ’em ups, with you constantly pushing forward as the cylinder chases you, crushing trees and structures and the ground itself beneath its immense bulk.

Well, not quite constantly. Small bubbles of sanctuary can be found in Towers, which halt the cylinder’s progress so long as you remain within their blue-tinted sphere of influence. Not only do these towers offer respite for the trebhum, they also provide opportunities to explore and evolve. Using their trunks, the trebhum can suck up different kinds of edible objects, storing them in their stomachs. Some provide health, while others provide energy used to flee from the cylinder. But a few of these objects will cause the trebhum to mutate, giving them longer legs for bigger jumps, or fur to keep them warm in cold areas of the world. There’s even a mutation that turns trebhums into a cube, which as well as helping them solve certain puzzles, is also extremely funny. It’s isn’t just your trebhum that benefits from these mutations either. As you progress through the world, your trebhum will encounter other trebhums that can join your family under the right circumstances. Some you can hatch from eggs by putting them in a sort-of incubation flower, while others must be revived with a magic crystal, or persuaded out of their bubble-like homes by providing them with the right resources.

There are pragmatic reasons for doing this – there are certain passages through the world that require at least three trebhums to unlock them, while you’ll also assume control of another trebhum if your group leader is killed. But mainly you just don’t want these cute little aliens to be squashed into paste by the cylinder. Your trebhum companions are the crux of the game’s more emergent moments. For example, my starting trebhum was killed by a predator within the first half-hour of the game, and it wasn’t until much later that I was able to revive it at a trebhum shrine, which felt like a special moment. It’s a game filled with clever ideas, although some of them are more fun in theory than in practice. Playing as these evolving creatures isn’t as fun as it initially seems. A big problem is the trebhum are not particularly satisfying to control. Acquiring better jumping legs is only fun if the jumping feels good to begin with, and a lot of the mutations suffer from being underwhelming beneath the fingers. The game’s communal side is similarly simplistic. Beyond opening the odd door and serving as extra lives, your fellow trebhum’s don’t do much in moment-to-moment play.

Yet while mechanically underwhelming, The Eternal Cylinder is rescued from tedium by its structure and storytelling. The broad story of the trebhum’s journey is lent context by some brilliant narration, which gradually unveils the complex and surprisingly emotive history of this resilient and adaptable alien race. Meanwhile, progression the next tower usually triggers a unique event that keeps the game feeling fresh, such as a giant serpent descending from the sky, or something emerging from behind the cylinder. The world itself is endlessly intriguing too. The planet on which the game takes place resembles a collaborative art project between Salvador Dali and Hieronymus Bosch, a surreal dreamscape where something strange is occurring in every corner of the frame. There are flying snot monsters, snails that can bisect themselves and then snap together like a bear-trap. You’ll walk up to what looks like a giant pink rock, only for it to suddenly split open at the bottom, revealing rows of human teeth. And yet nothing here feels random, the colour-palette and meticulous landscaping makes this fundamentally impossible world feel consistent and believable.

Then, of course, there’s the Cylinder itself, possibly the most terrifying adversary since Alien Isolation’s Xenomorph. When it grinds into motion, the whole length of it glows an infernal orange, illuminating the entire horizon in curvilinear hellfire. It’s frighteningly easy to underestimate too, starting off slow and then suddenly accelerating, its rumble becoming a deafening roar as it nears your tiny alien tribe. You can almost feel the heat of it from your screen as it lights up the backs of your trebhums, the camera shaking uncontrollably as you desperately scramble for the safety of the next tower. It’s a horrifying, mesmerising phenomenon, simultaneously impossible to look at and impossible to look away from. It’s a shame The Eternal Cylinder’s underlying systems don’t quite operate at the same level as its art and storytelling, because otherwise you’d be looking at a stone-cold masterpiece. Nonetheless, the Eternal Cylinder remains a smart, singular, and spectacular experience, while its unforgettable prismatic foe will haunt your nightmares for weeks to come.