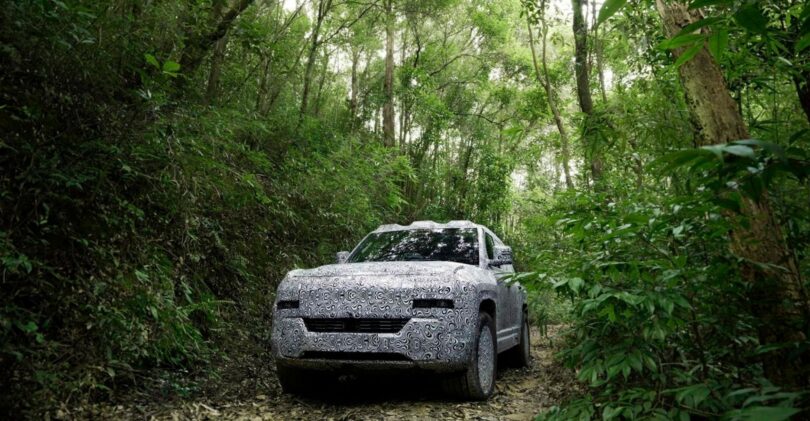 Leading Chinese electric vehicle firm BYD announced earlier this month that it will launch a new high-end automotive brand called Yangwang. A series of spy shots showing the first model of this brand was unveiled on November 24 in China. The car is positioned as an off-road SUV with an internal code name of R1, and it will be unveiled in the first quarter of next year.

According to the spy photos, this model is square in shape, has a long wheelbase and front, can cope with wading and gravel roads, and is equipped with a hanging spare tire. BYD previously published a patent in which four motors control four wheels. Even if the vehicle enters a deep-wading road and is floating, it still has the ability to drive normally and get out of trouble.

In terms of interior decoration, according to the previous tips, it is equipped with LCD instruments and a vertically placed, large central control screen. At the same time, the 3D rendering on the instrument shows a car with almost identical appearance to Mercedes-Benz G-Class, but it is not clear whether this is the real appearance of the car.

In terms of power, the new car will be equipped with four motors. The output power of the motors can be adjusted at all times according to speed, load and road conditions to ensure transmission efficiency and driving safety.

In BYD’s sales system, there is a set of assessment standards called WES. Every car sale of BYD may be assessed by unannounced visitors sent by the headquarters. There are many detailed actions that match the corresponding scores, such as two points for delivering water to consumers at the door and three points for saying “welcome.” Yangwang’s sales staff will go through strict WES assessment to impress consumers who are able to buy vehicles worth millions of yuan.

Exploring the high-end market has become the only way for Chinese car companies to drive further success. Dongfeng Motor’s Voyah, Geely’s Zeekr and Great Wall Motor’s WEY are all high-end brands. For a long time, BYD has expressed much hope in Denza, which is a joint venture between BYD and Mercedes-Benz with a price range of 300,000 yuan to 500,000 yuan ($42,005 – $70,009).

In addition to Yangwang, BYD will launch a new independent brand in 2023 to meet the individual needs of consumers. BYD will also openly recruit excellent dealers for the brand with models worth 400,000 yuan to 600,000 yuan, but an official name has not been announced yet. The positioning of the new brand will be between Denza and Yangwang, and it is expected to compete directly with luxury brands such as BMW, Audi and Mercedes-Benz.