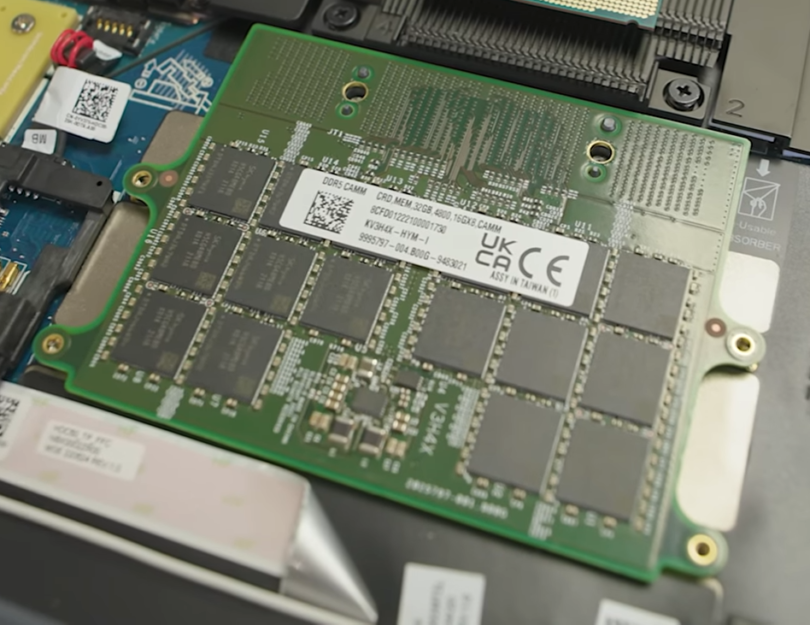 JEDEC is looking to replace the venerable SO-DIMM standard with a new form-factor called CAMM that allows better scalability of up to 128 GB per module and increased data transfer speeds beyond DDR5-6400. Furthermore, CAMM would allow for thinner and lighter laptop chassis, as well as user-replaceable LPDDR modules.

The SO-DIMM RAM standard for laptop and compact devices has been around for almost 25 years, and it looks like the venerable form-factor is starting to show its limits, especially with the introduction of the DDR5 RAM that can hit higher speed ratings. Back in April 2022, Dell came up with an alternative form-factor called CAMM (Compression Attached Memory Module) and this design will be used by JEDEC to create a successor for SO-DIMM, as reported by PCWorld. Unlike other standards that take quite a few years to see implementation, CAMM could be featured in laptops by 2024, since 20 companies already voted for the adoption of this standard.

CAMM was designed by Dell’s Senior Distinguished Engineer Tom Schnell, who also happens to be a member of JEDEC. Initially, there were some concerns that CAMM may end up as a Dell proprietary standard for the company’s powerful workstations, but with so many other companies validating CAMM through JEDEC now, this clearly is not the case anymore.

Designed to overcome the scalability and frequency limitations of the SO-DIMM standard, which is apparently hitting a “brick wall” with the DDR5-6400 spec, CAMM would feature increased capacities of up to 128 GB per module and, of course, higher transfer speeds beyond DDR5-6400. Additionally, ultrabooks and compact devices could become thinner and lighter thanks to the CAMM standard.

JEDEC is currently estimating that the finalized CAMM 1.0 specs should be released in the second half of 2023 and may include some modifications to Dell’s initial design. Another advantage offered by CAMM is that LPDDR modules can be replaceable instead of being soldered to the mainboard, which would add the much needed upgradability factor for thin and light notebooks.

I first stepped into the wondrous IT&C world when I was around seven years old. I was instantly fascinated by computerized graphics, whether they were from games or 3D applications like 3D Max. I’m also an avid reader of science fiction, an astrophysics aficionado, and a crypto geek. I started writing PC-related articles for Softpedia and a few blogs back in 2006. I joined the Notebookcheck team in the summer of 2017 and am currently a senior tech writer mostly covering processor, GPU, and laptop news.