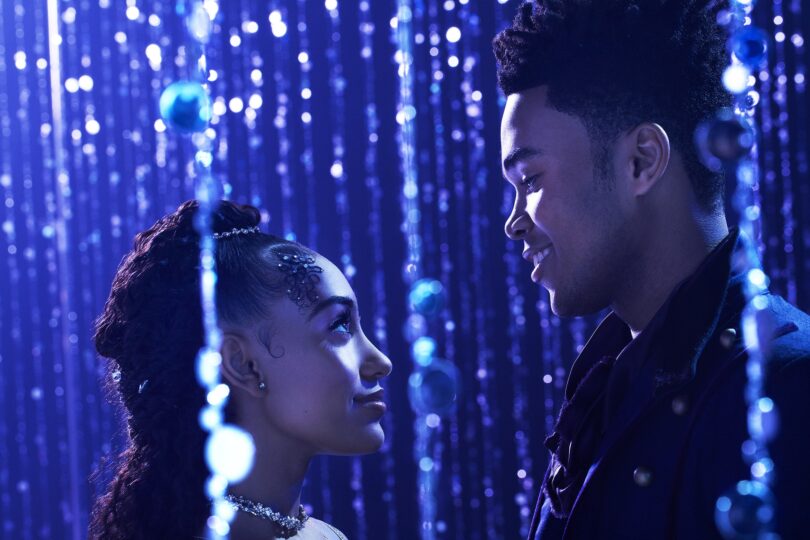 From the first frame, Disney’s new musical Sneakerella offers a lackluster attempt at diversity: It simply takes one of the world’s oldest tales and adds Black characters and Black culture. Then it goes a step further, transforming its protagonist into a “Cinderfella” named El (Chosen Jacobs), a young shoe-lover who falls for Princess Charming Kira King (Lexi Underwood). It’s an uninspired reboot—and its young audience deserves much more.

The twist on the Cinderella story is thus: Rather than an evil stepmother and stepsisters, El has an awful stepfather and stepbrothers. He sets out with his gay best friend Sami (Devyn Nekoda) to buy limited-edition sneakers, a journey that leads him to Kira, whose father just happens to be basketball star and sneaker tycoon Darius King (John Salley). Turn the pumpkin carriage into a classic car and the fancy ball into a sneaker gala and before you know it, Sneakerella has effectively retread all of its predecessor’s well-worn territory.

Therein lies the problem. The movie feels like opening a gift on Christmas morning and discovering a pair of socks when you really wanted a new phone. No one asked for this remake, and it’s ultimately a huge missed opportunity. At a time when Disney could use the wealth of talent at its disposal to create authentic stories that capture the communities it aims to reflect, it has instead offered up one of its oldest stories with some new faces and a few overproduced musical numbers. Taking marginalized groups of any kind and sticking them into a narrative that wasn’t created for them is lazy, even if it’s well-intentioned. And because the movie is on Disney+, the kids who need to see themselves represented the most might not be able to watch it. One of the beautiful things about Disney over the years has been its ability to reach people from all walks of life. Creating a film with increased representation and then limiting its accessibility feels like a step in the wrong direction.

Growing up in the 1990s/early 2000s, I witnessed the Disney that cornered the market on creating films everyone could relate to—The Cheetah Girls, Camp Rock, High School Musical, many of which became successful empires. They kept programming engaging, interactive, and fresh by adding sing-alongs, teaching choreography during commercial breaks, and hosting events like the Disney Channel Games. From a business standpoint, Disney’s need to keep up with the ongoing streaming wars is understandable, but it should still be creating quality content across platforms, which is something it seems to have dropped the ball on. Like so many other companies, Disney puts money where it can make money, but that isn’t always where it could do the most good.

Over the past few years, the company has created several reboots/spin-offs, like Raven’s Home; Girl Meets World; High School Musical: The Musical: The Series; and Proud Family: Louder and Prouder—just to name a few—effectively saying “If it ain’t broke, don’t fix it.” But just because it isn’t broken doesn’t mean Disney should keep making reboots and cashing in on nostalgia. It should be putting its massive power behind new shows and giving them a chance to shine. Disney should be doing better because it has shown us it can. The channel that once allowed us to feel like anything was possible should be using its shows and movies to inspire the next generation of dreamers and big thinkers. Disney has the playbook for this. The writers and directors it needs to do it are out there. All it has to do is lace up and try.