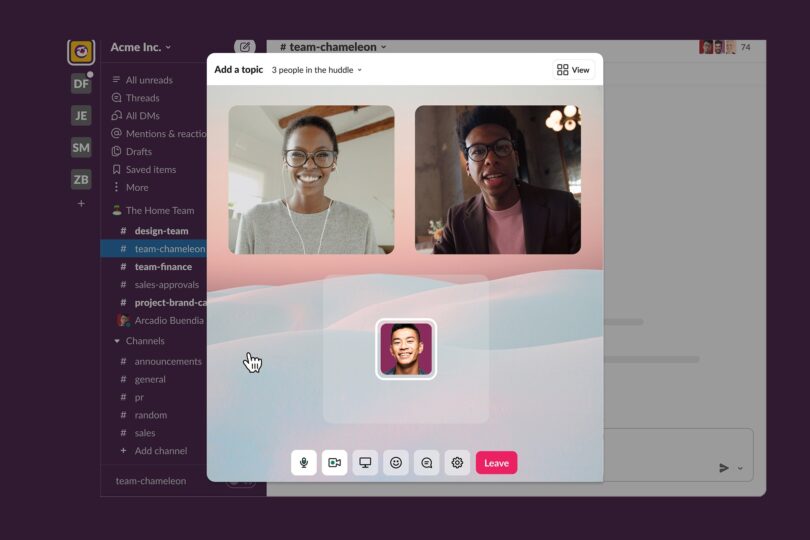 In the Before Times, we used to huddle in real life. Free of the formalities of a meeting or the intellectual rigor of a brainstorm, a huddle was spontaneous, productive, and (mostly) good-sported, the workplace equivalent of a basketball team taking a time-out to strategize. A huddle happened when a colleague strolled by your desk and asked for a quick sec that stretched to five minutes. We huddled by the water cooler, or in the kitchen. Then 2020 arrived and, well, we all know what happened next.

Last June, the popular workplace chat app Slack introduced Huddles, an audio-only feature designed to replicate the real-life thing. It was an immediate hang space, launched easily from within a Slack channel or a direct message. And it has been, according to Slack, a hit. It’s the fastest-adopted feature in Slack’s nine-year history. Nearly 44 percent of Slack’s paying enterprise customers use Huddles on a weekly basis, which equates to a combined 243 million minutes per week. Most Huddles last only 10 minutes, which may not please the engagement gods but speaks to a certain efficiency—much like those IRL huddles.

Now Slack is adding more bells and whistles to Huddles. At its annual conference on the future of work, Slack announced a revamped version of Huddles that claims to transform the humble Huddle into a “coworking space.” And the most significant new feature in that vision for the future of work is … video chat.

The new Huddles, when it rolls out in the fall, will include video chatting much like Zoom or Microsoft Teams. Slack has offered one-on-one and group video calling since 2016, but the feature isn’t easy to locate; by moving it into Huddles, Slack hopes it can ride some of the momentum that these audio chats have gathered. Video in Huddles will include a blurred background option, as is now standard on video meetings apps. Screen-sharing will soon be an option in Huddles, too, and multiple people will be able to share their screens simultaneously (which, if we’re being honest, sounds chaotic).

Users can also fire off Slack “reacji”—emoji, effects, and stickers—during video chats, which float across the frame. And live chat logs that happen during Huddles, as well as any links or documents shared, will be automatically saved in the channel or message thread from which the Huddle was launched.

It is indeed the Zoomification of Slack, though Slack appears allergic to the Zoom comparison. Slack’s senior vice president of product, Noah Desai Weiss, says video meetings serve “a ton of important use cases” but that the new Huddles is something different. “We’re really focused on an area we think is underserved, which is, how do you get a small team to be able to actually cowork together in a shared digital space?”

Fair enough. Slack Huddles exists as a feature within Slack, which means you can’t use Huddles to send a Zoom-like link or invite them to a scheduled video meeting. Huddles also caps the number of participants—to 50 people in the business version of Slack, or just two for free Slack users.