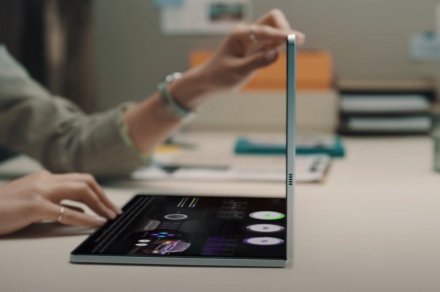 Samsung is among many technology brands set to release large-display foldables in 2023, but the brand is looking to outpace the competition by offering a display that is larger than any other when its in its folded state, according to NotebookCheck (via The Elec).

The Korean brand has been at the forefront of the foldable market since 2019, when it released its original Galaxy Fold, which features a 7.3-inch, tablet-sized flexible inner display. After several generations of adding tweaks, such as water resistance, an S-Pen stylus, and fast charging, Samsung has decided its next innovation its to go larger.

The company is slated to use 17.3-inch OLED panels from its own Samsung Display subsidiary, which will bend down to 13.3 inches diagonally when in a folded state. Using its own components is sure to bring down the price of Samsung’s upcoming large-display foldable, the publication added.

Other brands set to release giant foldables in 2023 include HP, which will unveil its first 17-inch foldable laptop with a display made by LG that truncates into an 11-inch device when folded. This device will be a direct competitor to the Samsung device as they are set to release around the same time.

The Elec claims Samsung had plans to release its 17.3-inch in 2022; however, the device was delayed due to unknown reasons. Had the foldable released this year, it would have competed with foldable laptops such as the Asus ZenBook 17 Fold and the ThinkPad X1 Fold Gen 2. The Asus ZenBook 17 Fold notably is a step behind the proposed specs of the Samsung foldable with a 17-inch screen supplied by BOE that folds into a 12.6-inch device. The ThinkPad X1 Fold Gen 2 features a 16.3-inch OLED display that folds into a 12-inch device.

Some hints suggest that there is still not a great demand for large display folables. Overall, they are still quite pricey. The Asus ZenBook 17 Fold sells for $3,500 and the ThinkPad X1 Fold Gen 2 for $2,500. Asus notably ordered 10,000 flexible OLED panels from BOE and HP ordered the same amount from LG, according to The Elec.

After postponing its device launch, Samsung reportedly upped its orders of flexible OLED panels from 6 million to 8.5 million.