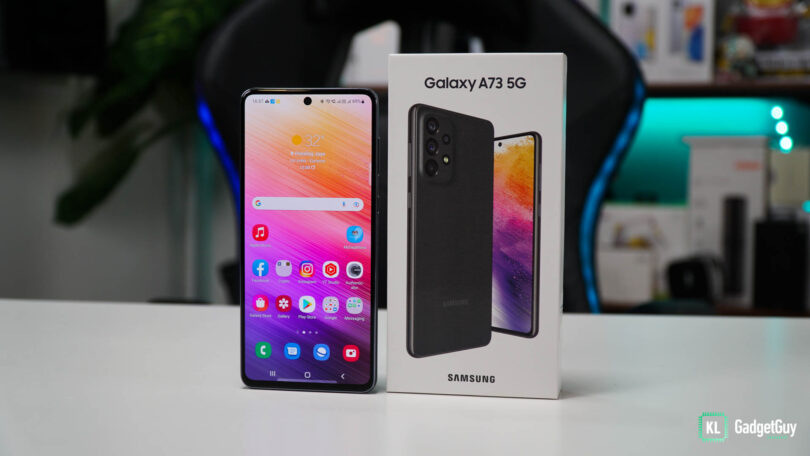 After checking out the 2022 Galaxy A series a few weeks back, we have finally received a review unit of the Galaxy A73 5G, the leading model of this year’s A series come with notable upgrades over its predecessor, such as a faster Snapdragon 778G processor, a 108MP primary camera with OIS and IP67 water and dust resistance.

The Galaxy A73 5G comes in a slim box just like the flagship Galaxy S22 series, as Samsung no longer includes a charger inside the box, hence what you are getting is just the phone, a USB-C to USB-C cable, a SIM ejector and several documents. If you do require a charger to go with, we recommend that you opt for Samsung’s 25W USB charger here.

Build quality wise, the Galaxy A73 5G doesn’t feel too different from the A72 as it has the very same polycarbonate build that feels pretty decent and makes the phone really lightweight, it has a matte back texture which doesn’t attract fingerprints and smudges, the camera bump is also slightly redesigned that blends in well with the back case and looks really nice.

Samsung ships the Galaxy A73 5G with One UI 4.1 that’s based on Android 12, which is one of the biggest selling point of the A series compared to the competition and the company is promising 4 years of major OS upgrades. The phone has 8GB RAM and 256GB of storage that’s expandable over MicroSD, which performs exceptionally well for the basic stuff like social media and web browsing.

Overall, the Galaxy A73 5G is a decent upgrade over the A72, the phone retails at RM2,099 and can be purchased here, we are currently working on a review and comparisons with other devices so let us know what you want to know about in the comments.