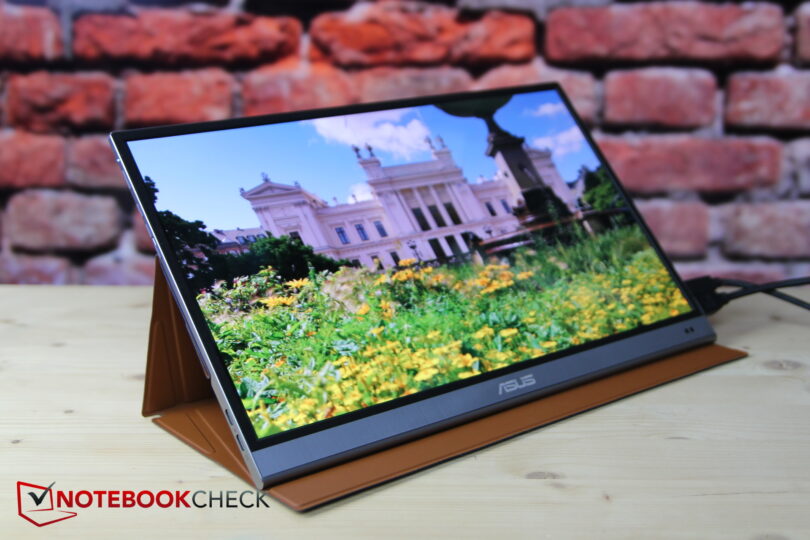 OLé OLED. The manufacturer advertises the feather-light (650 g) secondary display primarily with high color accuracy (100% DCI-P3), the high brightness (400 nits peak), fast response time (1 ms), HDR10, and so on. We test what the Asus OLED is suitable for and whether the rates really turn out that good.

In September, we reviewed the IPS version of the Asus ZenScreen (MB16AC), and now the manufacturer follows up with a portable, external OLED monitor.

Note: The manufacturer may use components from different suppliers including display panels, drives or memory sticks with similar specifications.

The case of the 15.6-inch ZenScreen is mainly made of metal, and only the black display frame is made of plastic. Thus, the screen is quite stable. But it is still light – the manufacturer states only 650 g and that is also exactly the value that our own scales show. Thus, it is even lighter than the 780 g of the IPS version.

The display can hardly be twisted, but the plastic frame can crack sometimes. The maximum thickness is just under 9 mm, but that only applies to the lower third of the display. It is even thinner above, we measured about 5 mm.

A new tripod thread is found at the lower, thicker end – very practical! The central threaded connector protrudes a few millimeters from the casing again.

The color is silver-gray, the Asus logo is emblazoned in reflective letters on the back, and the manufacturer has also made a note below the display on the front.

There are now only tiny, narrow control buttons on the left edge. The “hole” for the stand has disappeared; the function is now taken over by an included magnetic case that can be folded into a stand.

The ZenScreen does not have its own speakers, nor is there a touch function. On the other hand, the equipment scores with a proximity sensor, for example. This allows the screen to save power by turning off the OLEDs when you move away. However, the sensor can also be deactivated.

The Asus ZenScreen OLED has exactly five ports. Four of them are USB-C ports with different functions. The port on the bottom left supports Power Delivery, but not DisplayPort, so the included USB-C power adapter is connected here (10-18 W).

The other two USB-C ports support DisplayPort, so additional players can be connected here. A mini-HDMI port and a headphone jack in mini-jack format are also found on the right side.

The warranty period for the product in Germany is three years.

Accessories include a classy-looking brown/blue cover or “smart case” on the one hand, and surprisingly, the packaging itself. The latter should be kept because it can be converted into a monitor cover in a few steps. Reflections are then reduced in the dark, black box and the color intensity is strengthened by less incident light.

The brown Smart Case, on the other hand, not only protects the panel from scratches but can be folded and unfolded in various ways to create various stand systems for the monitor. It also adheres magnetically to the display casing and can thus also be removed easily.

However, we had the most problems with the cover. It can be bent in so many places that it is difficult to get the display into an upright position instead of a semi-recumbent one since the cover often bends very easily. It is not particularly stable as a stand.

There is no VESA mount, a tripod is recommended for intensive use.

Asus uses a glossy OLED panel in a 15.6-inch format. The brightness of just over 400 nits is very good, and the black value of an OLED panel is beyond any doubt anyway. It is vastly superior to the portable IPS rivals tested in the past at almost all rates.

Backlight bleeding is also not an issue with OLEDs; the organic LEDs illuminate the display evenly. The response times are a fast 1 ms.

PWM (see below) is more of an issue, though. OLEDs typically flicker with 60 Hz anyway, but this model additionally uses PWM with a frequency of 475 Hz from a brightness of 21% and below. The frequency drops to about 120 Hz at even lower brightness values.

Display response times show how fast the screen is able to change from one color to the next. Slow response times can lead to afterimages and can cause moving objects to appear blurry (ghosting). Gamers of fast-paced 3D titles should pay special attention to fast response times.

To dim the screen, some notebooks will simply cycle the backlight on and off in rapid succession – a method called Pulse Width Modulation (PWM) . This cycling frequency should ideally be undetectable to the human eye. If said frequency is too low, users with sensitive eyes may experience strain or headaches or even notice the flickering altogether.

Asus primarily advertises the high color space coverage of allegedly 100% DCI-P3 and the Delta E of less than 2. The latter is not specified in more detail, but it is correct according to our measurements for the grayscale, where the deviation is actually below the value of 2.

However, the color deviation is higher and cannot be improved by a new calibration; the panel is almost perfectly adjusted ex-factory.

Allegedly, the ZenScreen achieves 100% DCI-P3 coverage, which we can also confirm. Even AdobeRGB is covered by about 96%, and sRGB with the DCI-P3 is covered almost completely. Thus, the OLED is also suitable for professional photo or video editing.

Of course, the glossy surface is annoying outdoors, but the good brightness and the strong black level make up for that a bit. However, you should find a shady spot and make sure that the viewing angle is direct.

The ZenScreen stays cool without a fan in all situations. Even the power supply barely heats up at around 30 °C.

Besides its size, the power consumption of an OLED mainly depends on the displayed content. The LEDs virtually turn off in black, so unlike IPS panels, dark content consumes less than very bright content.

When browsing via script in the normal, white Windows theme, the screen consumes about 11 W at a brightness of 100 percent. Asus itself states that the consumption is below 15 W, which we can confirm.

Connected via USB-C to a DisplayPort-capable USB-C port of a notebook, the ZenScreen does not need an additional power supply and is powered by the notebook.

And those who need a truly mobile display can even power the ZenScreen with a sufficiently strong power bank. The display can handle 5 to 12 V at 2 A.

However, it might be tight at 5 V and 2 A in view of the consumption. It still works, but the brightness is reduced to 80 percent when connecting to another PC via USB-C.

The Asus ZenScreen MQ16AH, not to be confused with the IPS variant Asus ZenScreen MB16AH, is beyond reproach in terms of display. Contrasts and colors are brilliant and blacks are really black instead of the pale gray of standard IPS displays – great! The color space coverage is also impressive, so the screen can also be interesting for professionals. It is also particularly light.

Criticism can hardly be found with the OLED ZenScreen. The casing is not overly stable as a stand and the UBS-C cable to the power supply could be longer. Otherwise, the only complaint is the high price compared to other devices in this class. However, you also get top picture quality in return.

The Asus ZenScreen primarily convinces with great picture quality and high color space coverage. It is also incredibly light and has a tripod connection.

A C64 marked my entry into the world of PCs. I spent my student internship in the repair department of a computer shop and at the end of the day I was allowed to assemble my own 486 PC from “workshop remnants”. As a result of this, I later studied computer science at the Humboldt University in Berlin, with psychology also being added to my studies. After my first job as a research assistant at the university, I went to London for a year and worked for Sega in computer game translation quality assurance. This included working on games such as Sonic & All-Stars Racing Transformed and Company of Heroes. I ha