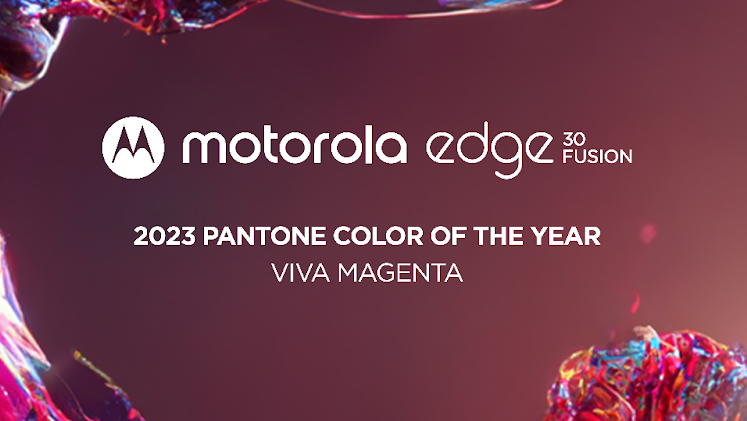 Pantone has announced its choice for 2023’s Color of the Year, and has partnered with Motorola to celebrate this decision with a new SKU of the Edge 30 Fusion finished in the “fearless” hue. Its unveiling also coincides with the launch of the Moto Buds 600 ANC, a new pair of TWS earbuds that will be bundled with the new special edition, albeit in a different Pantone color.

Pantone remains under fire online for putting whole swathes of its color libraries behind a new paywall in Adobe Creative Cloud; however, there now is another way to be sure of permanent access to one of its standardized shades: on the back of a new version of the Motorola Edge 30 Fusion.

The Snapdragon 888+-powered smartphone is to become available in Viva Magenta, (or Pantone 18-1750) freshly selected to be the Color of the Year 2023, thereby leaving the Very Peri (17-3938) of the Edge 30 Neo behind in 2022. The “fearless” new shade has apparently been chosen as it “conveys what it means to blend the virtual and the physical with enthusiasm“.

Therefore, Motorola’s parent company Lenovo and Pantone are to continue their global partnership, which may also extend into other areas of the former’s tech: for example, the ThinkReality A3 AR glasses will support a “Magentaverse” experience as part of the latter’s formal launch for its new Color of the Year.

Further Pantone colors may pop up in more Lenovo-brand products – such as the new Moto Buds 600 ANC. They have been revealed to be Snapdragon Sound-equipped TWS earbuds with hybrid active noise cancellation (ANC), Bluetooth multi-device connect and Google Fast Pairing thus far.

They will be available in Winetasting (or Pantone 19-2118) in a bundle with the Edge 30 Fusion in Viva Magenta on their release. This will occur in the US on December 12, 2022 via motorola.com only for US$799.

Meanwhile, the plain black version of the Edge 30 Fusion is now available on Amazon.