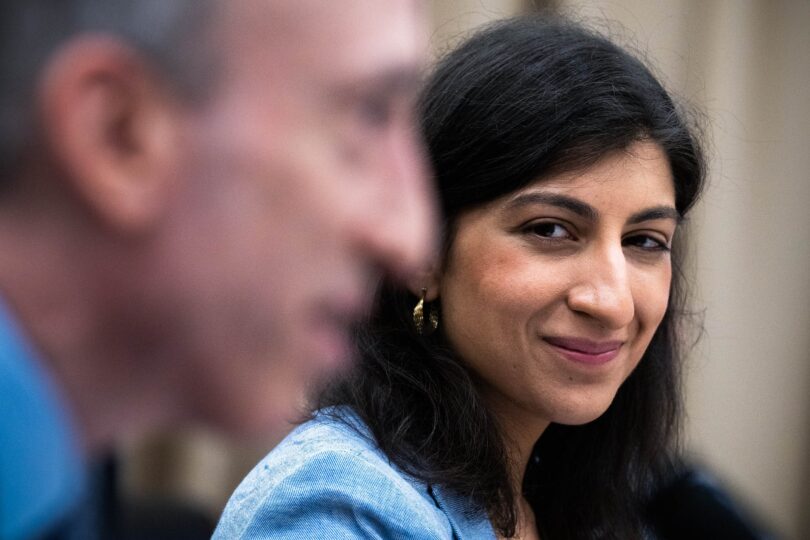 Well before she became chair of the Federal Trade Commission, Lina Khan had her eye on the practice of employers banning workers from job-hopping to a competitor. She is no fan of noncompete clauses. Those restrictions are commonly forced on employees, sometimes without informing them. By preventing workers from taking on new, presumably higher-paid jobs, they can depress wages and opportunities for advancement. And though conservatives might believe that the FTC should keep its nose out of stuff that doesn’t involve antitrust or consumer harm, one speaker in a 2020 FTC workshop about the issue noted that the very name of the problem seemed to call for action from the agency charged with ending practices that stifle competition: Noncompetes.

So it was not exactly a shock last week when Khan announced a proposed rule that would ban employers from issuing noncompete restrictions. It was the kind of presumptuous move that people expect from Khan, who came to the post as an unabashed skeptic of the bromides of big business. Still, it’s breathtaking how many US workers would be liberated by this rule. “One in five,” she says in a Zoom call we had this week. “And that’s a conservative estimate.” She’s even got an estimate of how much those clauses cost workers: $300 billion every year.

Right before announcing the Non-Compete Clause Rule, Khan’s FTC set the plate by revealing settlements with three companies that egregiously abused the practice. One involved Michigan-based Prudential Security, which forced its low-wage security guards to sign contracts agreeing not to work in the field within 100 miles of the job site for two years—or face a $100,000 penalty. In the text of the proposal for the new rule, she notes some other examples, including one restricting workers at a sandwich shop from “selling submarine, hero-type, deli-style, pita and or wrapped or rolled sandwiches within three miles of any of the chain’s more than 2,000 locations.” (Who knew that Jimmy John’s had so many stores?) Those cherry-picked cases make noncompete clauses seem supervillain-ish.

Wages aside, Khan emphasizes that noncompete clauses impose a deeper harm on the economy by discouraging innovation. “Scholars have found that one thing that really promotes innovation is the easy flow of information and knowledge,” she says. “When you lock in workers, most innovation is totally blocked.” While she admits such effects are hard to measure, she says that those scholars have documented a number of “natural experiments” that prove the point.

The most canonical natural experiment of all is the contrast between the fates of Boston’s Route 128 corridor and the Bay Area’s Silicon Valley. In the 1960s, those tech regions were closely competitive. But California has a law that forbids noncompete clauses. Some attribute at least part of Silicon Valley’s success to the freedom tech workers have to move to competing firms unencumbered, or to become founders without a year or two in the noncompete penalty box. Meanwhile, the locked-in geeks on Route 128 grew whiskers—or migrated west—while their employers at DEC tried to figure out what that PC thing was all about.

Conservatives despise Khan’s proposed rule. The Wall Street Journal opinion page calls it “an air kiss to Big Labor.” The lone Republican FTC commissioner, Christine S. Wilson, strongly opposes the rule, in part because, well, we’ve had noncompete clauses since forever, and anyway, who does the FTC think it is?

“I am dubious that three unelected technocrats have somehow hit on the right way to think about noncompetes and that all the preceding legal minds to examine this issue have gotten it wrong,” she writes, as an unelected technocrat herself. The US Chamber of Commerce calls the proposed change an “unlawful action” and claims that getting rid of noncompetes will depress innovation. Why would a company bother to invest in innovation, or even to train workers in specialized skills, if those ingrates could walk that knowledge out the door?

Khan drily notes that companies in California, despite the state’s ban on noncompetes, have managed to innovate pretty well. You know … Apple, Disney, Google, the guy who invented the AeroPress. And she’s got a message for those firms which will now face the scary prospect of losing those clauses if the FTC rule becomes official. “At the end of the day, companies have to invest in workers if they want to be successful,” she says. “You retain talent by actually competing, offering them better wages, better benefits, better training and investment opportunities. That’s how you keep retention high rather than locking workers in place.”

As for the fear of workers swiping intellectual property, Khan says her rule won’t affect trade-secrets litigation, though she doesn’t want trade-secrets restrictions interpreted so broadly that they become a shadow form of noncompete.

While the non-noncompete rule is only in the proposal stage, Khan thinks that her agency has made a pretty good case. “I mean, it’s a 218-page rule!” she says. “Almost a half of that is reviewing very, very carefully the empirical studies.” But she also encourages everyone with an opinion or relevant evidence to chime in during the 60-day comment period ending March 10 and says the agency will look at everything with an open mind. But with a 3–1 majority of Democrat commissioners, it’s fair to predict that the agency will get its rule in some form or other.

I ask Khan whether she views the rule as a natural experiment of her own, testing to see how much the FTC can get away with before the Supreme Court raps her knuckles. Last June, the court ruled that the EPA overstepped its bounds in regulating carbon emissions. Concurring with the majority opinion, Justice Neil Gorsuch promoted a doctrine that agencies can’t make sweeping new regulations unless Congress explicitly approves them.

Khan answers by citing Congress’ original intent for the FTC to ensure competition. “It’s an authority that, especially in recent decades, hasn’t been used as much, and I think that’s a travesty,” she says. “We as enforcers have an obligation to enforce the laws that Congress charged us with. I think we have pretty clear authority, pretty clear precedent. If we get legal challenges, we’ll be prepared to fully defend ourselves.”

Khan’s case against noncompete clauses is strong. But five and potentially six of the current Supreme Court justices aren’t accustomed to bestowing air kisses on labor, big or small. Instead, they seem to take pleasure in directing sputum toward the faces of workers who assert their rights—or regulators who want to extend those rights. If they strike down Khan’s rule, she’ll have as little power to restore it as those Prudential security guards who were trapped in their miserable jobs by noncompete clauses.

In November 1998, I wrote about the rise of Silicon Valley wannabes in a Newsweek cover story titled “The Hot New Tech Cities.” As far as I can recall, noncompete clauses didn’t factor into my thinking.

How do you go about building a tech city? It’s not easy. “Silicon Valley is a set of networks and social relationships—simply plopping down a science park isn’t going to work,” says AnnaLee Saxenian, a University of California, Berkeley, associate professor in city and regional planning. The main technique of aspirants is to reverse engineer Silicon Valley …

Whether they come from existing companies, a university or, in the case of Tel Aviv, the Army’s Central Unit for Data Processing, smart new hires are like oxygen to high-tech firms. Only places with a rich talent pool can claim to be a tech city. Case in point: after years of bragging about how even a remote location like the so-called Silicon Prairie in North Sioux City, SD, could incubate a world-class computer manufacturer, Gateway threw up its hands and relocated its administrative headquarters to San Diego. “We simply exhausted the Sioux City workforce,” explains vice president John Heubusch. On the other hand, once talent reaches critical mass, young fortune seekers flock there, secure in the knowledge that they can choose from a range of existing companies and hot startups.

Ask Me One Thing

Lessa writes, “All hail the oral exam!” and then ruminates about the long arc of civilization from the oral tradition to the written word and now digital communication generated by AI. “How do we frame all this?” she asks.

Thanks for the question, Lessa. Keeping to my New Year’s resolution, I won’t use your question as a prompt for a ChatGPT answer. I do feel that AI-generated content is a huge deal. But I also think we need to get a grip, particularly regarding the fear that large language models are going to enable an epidemic of cheating by people who outsource graded work to these robots.

Yes, some instructors may wind up orally quizzing students to make sure they have a grasp of material. I think that’s a great idea regardless of the chatbot issues. One-on-one tests may be more time-consuming, but the real-time interplay between teacher and student might be an educational revelation in itself. So I second your hailing of that development.

Still, I refuse to be alarmed that students might use LLMs to cheat on their work. Of course when it comes to earning credentials for jobs that affect safety—doctors, architects, plumbers, and such—we may well have to proctor exams to make sure that unqualified fakers don’t build our bridges or perform root canals. High school and college essays are another matter. The point isn’t to win a grade but to train students to think logically, express themselves clearly, and make a linguistic connection with a reader. Students pay astronomical tuition fees to learn subject matter from professors. You’d have to be a real idiot to miss out on learning those valuable skills by handing in the results of a prompt given to ChatGPT. Who’s cheating who?

You can submit questions to mail@wired.com. Write ASK LEVY in the subject line.

The 6-year-old kid who shot his teacher. I can’t even.

Last but Not Least

The results are in from CES, from Afeela (Sony’s new car) to the $100 hearing aid.

To the dismay of scientists, the latest version of Covid has a “scarient” name: the Kraken.

Are we finally getting rid of the parking lot? A world without them would be paradise.

Don’t miss future subscriber-only editions of this column. Subscribe to WIRED (50% off for Plaintext readers) today.