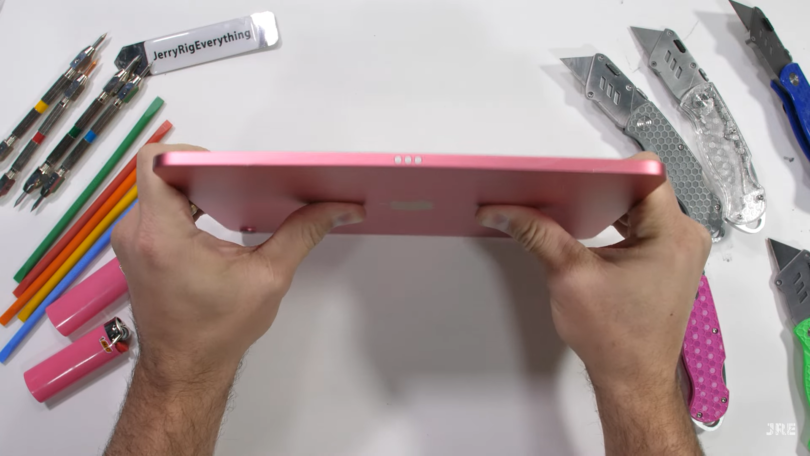 The latest, tenth-gen version of Apple’s most vanilla iPad comes upgraded to a relatively new A14 Bionic SoC and (perhaps more importantly) USB type-C for charging and syncing. However, as the famous durability vlog JerryRigEverything has now discovered, it also comes with drawbacks besides its confounding choice of first-party stylus support.

Zach Nelson, host of the well-known device stress-testing YouTube channel JerryRigEverything, normally prides himself on his “art class with Jerry” portions of his videos, executed on the metallic backs of the smartphones or tablets he assesses whenever possible. However, he would apparently prefer us not to discuss the “nightmare Kirby” he ended up with on the appropriately pink chassis of the new Apple iPad 10.

Nelson had considerably less compunction in pointing out the less appealing aspects of the new affordable-grade (well, for Apple) tablet itself, its approach to Pencil support included. Despite having magnetic contact points that could house a newer model of this stylus, the iPad 10 is only compatible with its first generation.

This may be intended to suit users who might only have the original Pencil to hand, yet may inconvenience them as they will need to construct a daisy-chain of a new, optional-purchase dongle and a USB type-C adapter just to charge the accessory with the tablet.

In addition, Nelson highlighted the air-gap between the display and its outer glass, which may, as we’ve also observed, may create even more of a disconnect between the new iPad and the Pencil-toting user. However, the new tablet may have bigger issues, chief among which is the tendency to snap right along those less than functional contacts when subjected to bending forces.

Therefore, an iPad 10 user may have to treat their tablet with as much care as if it were a new top-end Pro instead. Its build quality did allow Nelson to present the device’s durability test and (somewhat literal) teardown in one video, at least, revealing its minimalist internals that include a two-part battery that might have also contributed to its all-too-easy destruction.

The Apple iPad Air 5: now not that much more on Amazon