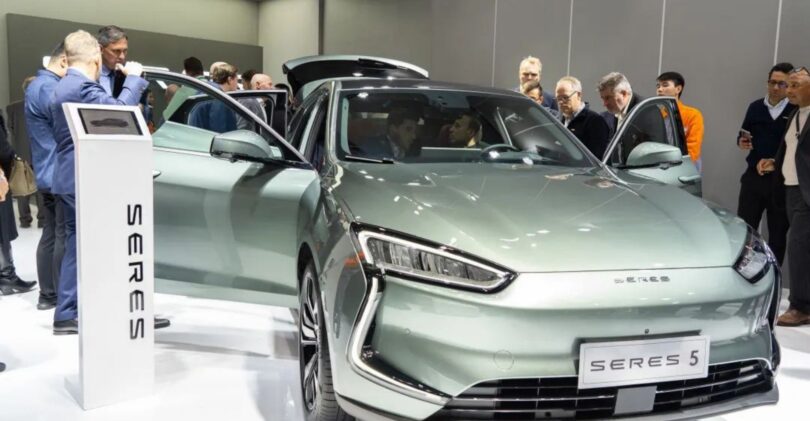 Seres, Huawei’s automaking partner, showcased its new energy vehicle model SERES 5 at the Brussels Motor Show on January 13, also signing contracts with more than 20 partners that accounted for more than 20,000 orders. The auto show, which runs from January 14 to January 22, is the largest auto event in Europe so far this year.

Available in three configurations (standard version 2WD, premium version 4WD, and flagship version 4WD) the SERES 5 is a sporty, premium e-SUV. The starting prices of the three versions are €63,900, €67,900, and €74,900, respectively. The vehicle can accelerate from 0 to 100 km/h in 3.7 seconds, thanks to its front and rear motor peak power (430KW) and peak torque of 960N.m. Available in eight exterior colors and five interior ones that can be combined as wished, it is equipped with HUD, a 15.6″ central control screen, and a 12.3″ LCD dashboard.

The car is equipped with 80kW ferrous lithium phosphate and 90kWh semi-solid high-performance batteries, which can be driven as far as 530 km on one charge. It is compatible with 95% of available charging systems in Europe. In addition, it supports vehicle-to-vehicle (V2V) output, so it can charge other vehicles when needed. It also has a vehicle-to-load (V2L) function, which can provide power for camping equipment.

At the Paris Motor Show last October, Seres exhibited its compact pure electric SUVs, the SERES 3 and SERES 5. The firm’s new energy vehicles are very popular in the German, South Korean and Singaporean markets. In addition, Seres has built assembly plants with its partners in Morocco, Pakistan, Turkey and other markets, and has carried out in-depth localization operations. By 2022, Seres had exported nearly 500,000 cars to more than 70 markets.

In December, a total of 10,143 vehicles were delivered by the AITO brand, co-developed by Seres and Huawei, including M5, M7 and M5 EV. M5 set the fastest record for the sales volume of a single model to reach 10,000 units. The delivery of the M7 started only 51 days after its unveiling. The M5 EV, which was unveiled in early September, was delivered at the end of October.

In the past six years, Seres’s accumulated investment in R&D has exceeded 10 billion yuan, and the annual investment in R&D reached 10% of sales revenue. Seres currently has nearly 3,000 patented technologies and 25% R&D personnel.