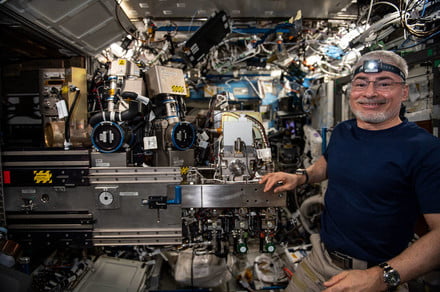 This week, record-breaking NASA astronaut Mark Vande Hei will be returning from the International Space Station (ISS) along with two of his Russian colleagues, cosmonauts Anton Shkaplerov and Pyotr Dubrov.

NASA will be livestreaming the trio’s departure from the ISS and their return to Earth on a Soyuz MS-19 spacecraft, and we’ve got the details on how you can watch along at home.

What to expect from the undocking and landing

Vande Hei has been on the ISS since April 9, 2021, and he recently surpassed the record for the longest spaceflight by an American. During that time he has kept space watchers entertained by sharing stunning photos of the views from the ISS and with his dance to celebrate 300 days in orbit. Now he’ll be heading back to Earth late on Tuesday, March 29, after a total of 355 days in space.

Along with Vande Hei, Shkaplerov and Dubrov will also be traveling back to Earth on the Russian Soyuz spacecraft. Despite escalating tensions between Russian space agency Roscosmos and other international space agencies due to the Russian invasion of Ukraine, the ISS is continuing normal operations and that includes the use of Russian spacecraft to carry back both U.S. astronauts and Russian cosmonauts.

How to watch the undocking and landing

NASA TV will be livestreaming the trio’s departure from the space station, including the farewells, undocking, deorbit burn, and landing. You can watch along with by using the video embedded at the top of this page or by heading to NASA’s website.