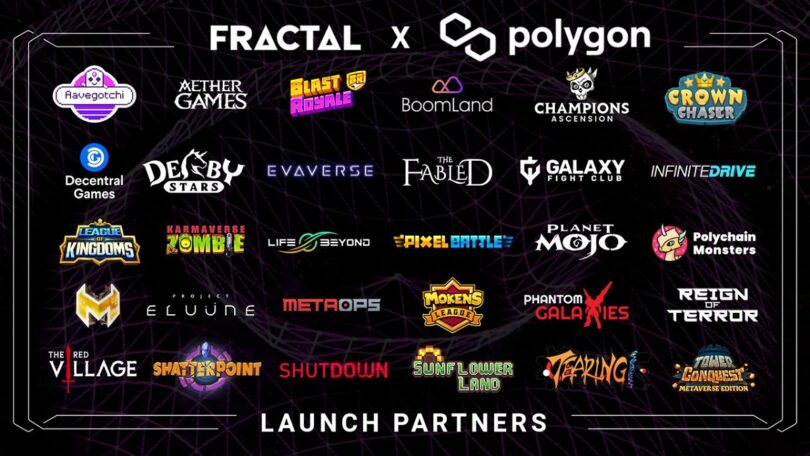 Connect with top gaming leaders in Los Angeles at GamesBeat Summit 2023 this May 22-23. Register here.

Polygon Labs said that Fractal will expand its Web3 gaming platform to the Polygon blockchain protocol.

Fractal’s product suite, F Studio, will be available on Polygon including its non-fungible token (NFT) launchpad, marketplace, tournaments, developer SDK, game launcher and Sign-in with Fractal service. The functionality with Polygon is live and available in three games, with more in the coming months.

Polygon will also be making a strategic investment in Fractal, deepening the partnership and allowing the team to better serve Web3 game developers and players.

Founded in 2021 by Justin Kan, cofounder of the popular streaming service Twitch, Fractal helps game developers with tools to solve their most pressing blockchain and infrastructure needs. F Studio is a suite of developer tools for incorporating Web3 technology into projects quickly and easily, with features such as a gamer-friendly wallet and account management system, in-game marketplace APIs, fiat on-ramp and NFT minting on demand.

Join the GamesBeat community in Los Angeles this May 22-23. You’ll hear from the brightest minds within the gaming industry to share their updates on the latest developments.

“We’re very excited about this,” Kan said in an interview with GamesBeat. “We want to be where all the games are — the most anticipated game developers wherever they will be.”

Fractal and Polygon will also launch a campaign of tournaments and game-centric activations leading up to the Game Developers Conference in late March. With this collaboration, these titles will have exposure to a larger player base, helping to expand and integrate the whole Web3 gaming community.

Fractal turned to Polygon for features such as speed and scalability, the security of the Ethereum network, and its ability to accelerate the development and accessibility of games. To date, over 200 unique titles have launched on Polygon.

About a year ago, Fractal decided to make sure its platform could run on any blockchain by creating a new layer of abstraction.

“People are also launching a lot of games on Polygon, and some of the biggest games are there. And so we decided we wanted to bring our products there and support them,” he said.

The company has a tournament product as well as a way to launch games on desktops. It operates an NFT marketplace, a wallet and a system for logging into games.

“All of those are brought to Polygon now,” he said.

Sandeep Nailwal, Co-Founder of Polygon Foundation, said, “Fractal has emerged as a crucial hub for the discovery of blockchain games. By teaming up with Fractal and combining their impressive suite of developer tools with our own, we aim to make 2023 the year we bring Web3 gaming to the mass market.”

These titles saw a 54% increase in total unique addresses on the network in 2022. Bringing Fractal’s tools into the fold will ensure that Web3 game developers can continue to invest their resources into building top-quality games.

Robin Chan, the cofounder of Fractal, also said in a statement, “From user acquisition to blockchain tooling to financial infrastructure, we put the framework in place so [game developers] can focus on successful game development. Partnering with Polygon’s own efforts to provide a high-performance environment to its community will bring this future forward even faster.”

When the company started, the Solana blockchain was making a lot of inroads into gaming. But lately, Polygon has had big successes, he said. So the company did the work to move to the new blockchain.

In October, Fractal added support for the Ethereum blockchain. Kan said the company can now transition to new blockchains without a lot of technical effort.

Kan said the company has about 18 people and it has deliberately stayed small, even though it has raised a lot of funding.

“Just look at what has happened in the market,” Kan said. “A year ago, fundraising was easy. We raised a lot, but I figured we should not spend it because you never know how long it has to last. It was similar to when we started Twitch. I’m a believer in small teams.”

Kan did not disclose milestone numbers for Fractal, and he did not say how much money the company raised from Polygon. He noted that many companies should now expect that they won’t be able to get the same valuations they got before the downturn. That will have a cascading effect on valuations.

Polygon said it has processed 2.36 billion transactions and has more than 211 million unique addresses, tens of thousands of decentralized apps and more than 1.12 million smart contracts created. The existing Polygon network is home to some of the biggest Web3 projects, such as Aave, Uniswap and OpenSea, and well-known enterprises, including Robinhood, Stripe and Adobe. Polygon Labs is carbon neutral with the goal of leading Web3 in becoming carbon negative.

GamesBeat’s creed when covering the game industry is “where passion meets business.” What does this mean? We want to tell you how the news matters to you — not just as a decision-maker at a game studio, but also as a fan of games. Whether you read our articles, listen to our podcasts, or watch our videos, GamesBeat will help you learn about the industry and enjoy engaging with it. Discover our Briefings.