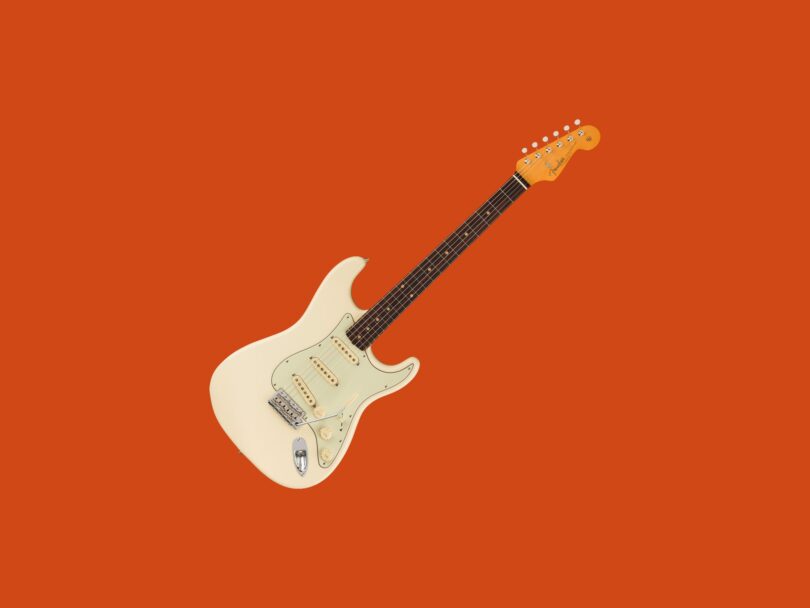 Vintage guitars are expensive because most people who play guitar grew up hearing them, seeing them on TV, and dreaming of owning a real one someday. This fact has bolstered many brands into the 21st century, but few as much as California’s Fender, whose iconic Stratocaster is likely the image you have in your head when you think “electric guitar.”

The early ’50s and ’60s models of the Strat were affordable tools used by the likes of Jimi Hendrix, Eric Clapton, George Harrison, and David Gilmour, but they’ve all but disappeared from the leathery hands of average musicians and into the soft mitts of collectors.

Fret not—we now have our best option ever to feel just like our heroes of the mid-century: Fender’s revamped American Vintage II collection. With a guitar like the new, off-white 1961 American Vintage II Stratocaster just released this fall, I can close my eyes and feel what Hendrix felt at recording studios in the early 1960s (albeit right-handed). There’s vintage-spec paint, neck, frets, pickups, and hardware; the new (old) model sings with the same intensity but without the same skill from my fingers. It feels like hopping back to the past every time I plug in my cable.

There’s a reason why obsessed purists will only play the vintage stuff, and that’s why Fender has recharged its vintage reissue twice in the past decade, now designed to span more eras, more instruments, and to be more year-specific (rather than decade-specific) in its offerings. These changes don’t just expand the line, they help with period accuracy—unlike some of the vague homages we’ve seen from Fender and others in the past, with modern specs and vintage specs mixed in to give you the best of both worlds.

Unlike past guitars, which borrow the best of multiple years, the American Vintage II 1961 Stratocaster is a faithful reproduction of the guitars that rolled off the line in that year (with better quality control). You get essentially exactly what Hendrix did if he bought it from a shop in New York City that same year: a nice brown hard-shell case, the off-white guitar with mint green pickguard, and a tremolo arm. Nerds will know that Hendrix’s pickguard would have been green because of the color bleed-through on the three-ply white-black-white guard. This pickguard, made with better plastic, is just colored to match the vintage look.

You do, however, get actual brown clay dot inlays on a gorgeous rosewood slab fretboard, and the guitar is finished in era-correct nitrocellulose lacquer, so it will break in over time, like a baseball glove. The lacquer isn’t quite as thin as the stuff used on the original guitars to my eyes, but that’s likely because the original material is too toxic to be legal. In any case, it has none of the plastic, perfect-forever finish from Fender’s other models that purists say don’t feel or vibrate the same in their hands or on their bellies.

Another important factor is the 7.25-inch fretboard radius, which is rounder than the fret side of most modern guitars. I find that this makes it easier to play chords on the Vintage II Strat, but harder to play fast notes and bends up high. It also gives the neck a springier, quicker feel when you bend strings, at least to my hands.