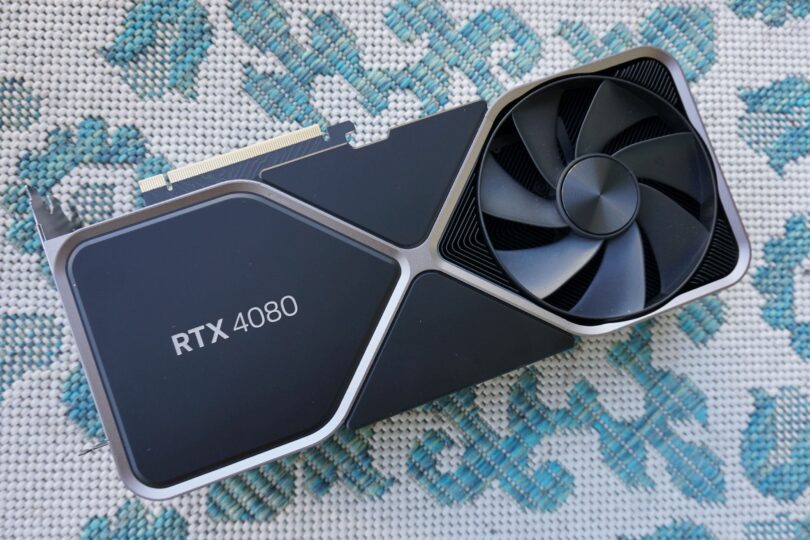 Nvidia’s latest GPUs made headlines for phenomenal power and astronomical prices. The GeForce RTX 4080 in particular is priced way, way above both its AMD competition and the usual MSRP bump from previous Nvidia generations. While it’s a bit early to call the 4080 a flop, early indications from the retail world seem to show that PC gamers — and even GPU scalpers — aren’t interested.

Stock for the $1200 card seems to be high at brick-and-mortar stores and web outlets alike, with many tech sites and even Reddit users noting the ease at which you can find the ostensibly hot item. Prices on eBay are hovering around retail for cards from OEM partners like Gigabyte, PNY, and Zotac, and even the usually-coveted Nvidia “Founder’s Edition” cards are sitting in the Buy It Now section for days at a time. A year ago, even these overpriced cards would have been flying off listings like the heatsinks were made of gold.

The heart of the problem is the RTX 4080’s value proposition, or rather, its lack thereof. In his PCWorld analysis, Brad Chacos concluded that the card is about $500 more expensive than it should be, compared to its increase in performance of the RTX 2080-to-3080-jump. Don’t get us wrong, the card is absolutely amazing for gaming and content creation. But after two years of monstrously inflated street prices on graphics cards have finally concluded, not to mention the lower prices for new cards from both AMD and Intel, it looks like the PC gaming public is largely uninterested in the GeForce RTX 4080.

Nvidia seems to have built — and priced — the RTX 40-series card on the assumption that pandemic-era GPU pricing was here to stay. That obviously didn’t turn out to be the reality, and retailers are keenly aware of it. At least two Newegg listings for the RTX 4080 show the card as ineligible for refund once purchased. That’s an indication (though not proof) that buyers, presumably scalpers, are attempting to go back on their purchases in high numbers. I’ll wait while you chase down a teeny-tiny violin, so you can play a solo for their missing profits.

What can Nvidia do to fix it? The company already canceled the $900 version of the card, which would have come with less RAM and a less powerful version of the GPU. We may see that design resurface as a rebadged RTX 4070 or 4070 Ti, but in the meantime it’s a huge expense for Nvidia and its partners. The only other realistic option to juice sales is a price cut for the 16GB version of the card. Unconfirmed rumors state that Nvidia is thinking about just such a cut later this month. Again, those rumors are unconfirmed…but it hardly takes a Nostradamus to predict basic market forces pushing Nvidia to make the RTX 4080 more attractive.

Michael is a former graphic designer who’s been building and tweaking desktop computers for longer than he cares to admit. His interests include folk music, football, science fiction, and salsa verde, in no particular order.