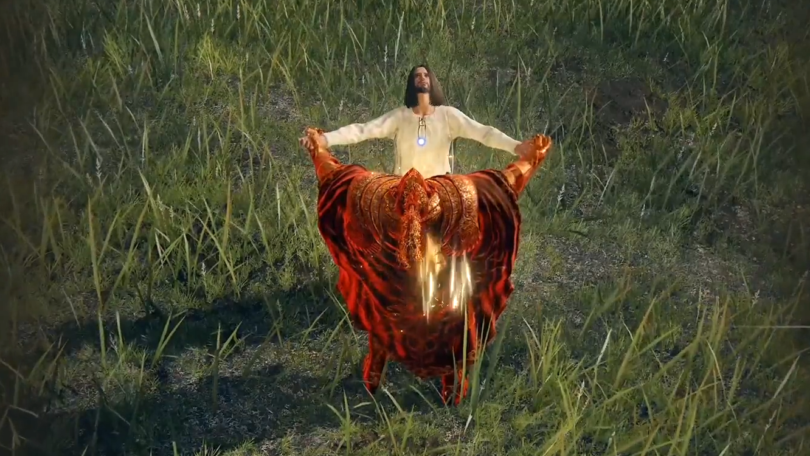 The messiah has made his way to Elden Ring, as a player called Jesus Christ keeps invading other people’s games and peacefully performing gestures of worship.

As posted on Reddit (opens in new tab), one Elden Ring player encountered the Christian savior in the game’s PvP mode, but what starts as an ominous showdown quickly transforms into a spontaneous moment of peaceful worship.

Both players walk slowly toward one another, stop toe to toe, and simultaneously perform the Rapture gesture, raising their hands in the air in what looks like recognition of the Lord. The whole encounter is supposedly entirely spontaneous, and remarkably in sync. You can watch the video below.

To top it off, the invading Jesus player is dressed in typical biblical garb, complete with a long white robe, shoulder-length hair, and a beard. The plumed helmet, large shield, and thick shoulder armor of the other player make them look somewhat like a Roman legionary – very fitting.

“I entered this world an invader. I left this world a believer,” the original poster titled their video.

“Glad you didn’t kill the guy. His game takes three days to load every time he dies. Must be horrible,” said another commenter, with a gag that’s surprisingly on-trend for the Easter season.

Another pointed out that Jesus looks to be carrying a few daggers on his hip, presumably just in case he crosses any non-believers while wandering the Lands Between.

Despite Elden Ring’s punishing difficulty and unrelenting challenge, the community that’s sprung up around FromSoftware’s latest action RPG is surprisingly playful. As well as sharing tactics for defeating tough bosses and showing off impressive combat runs, players have been quick to embrace the lighter side of the game.

One player shared a character build that turns their Tarnished into a Sith Lord. Another has come up with an inventive way of destroying rune-harvesting AFK grifters using a giant cannon. For others, Elden Ring simply gives them an opportunity to perform comical stunts by invading other people’s games.

Jesus Christ isn’t the only real-life figure to make his way to Elden Ring. Players calling themselves Will Smith have started invading people’s games, walking up to their opponents and slapping them across the face in an imitation of the actor’s recent Oscars appearance.

Add to that the speedrunners cruising through Elden Ring, and you’ve got a community of players that are ringing every ounce of novelty from the gritty action RPG. Elden Ring might be an epic fantasy adventure, but players – like Jesus Christ above – are showing it’s also a great canvas for simply messing around.

Callum is TechRadar Gaming’s News Writer. You’ll find him whipping up stories about all the latest happenings in the gaming world, as well as penning the odd feature and review. Before coming to TechRadar, he wrote freelance for various sites, including Clash, The Telegraph, and Gamesindustry.biz, and worked as a Staff Writer at Wargamer. Strategy games and RPGs are his bread and butter, but he’ll eat anything that spins a captivating narrative. He also loves tabletop games, and will happily chew your ear off about TTRPGs and board games.