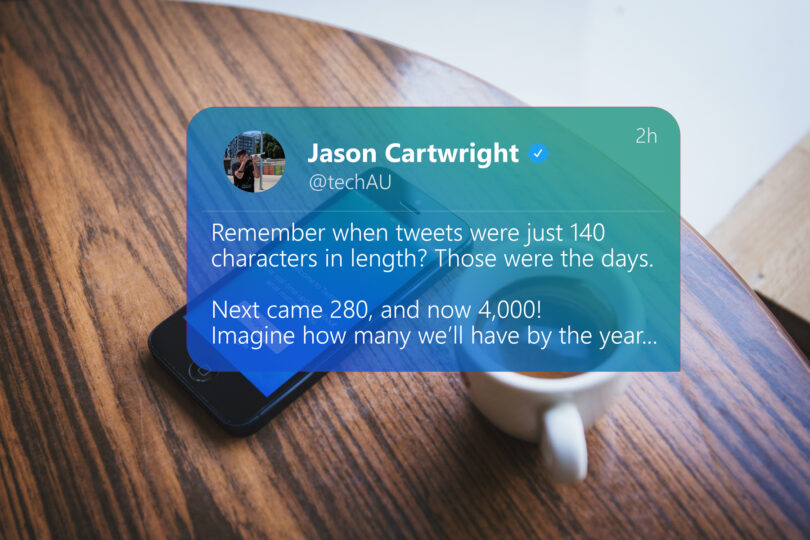 This week, Elon confirmed that Twitter would dramatically increase the character limit for Tweets to a massive 4,000 characters. This equates to close to 1,000 words for average length words and will be a dramatic change to the service that currently limits posts to 280 characters.

280 characters definitely feel restrictive, there are plenty of times when I’ve had to spend time restructuring a tweet to meet the character limit, so it would be nice to have so extra room.

Twitter users regularly see Tweet threads that span multiple tweets, in an effort to convey a complex thought or story, which would be better served and more digestible as a single post.

There have been many services over the years that have attempted to address this shortcoming of Twitter, TwitLonger for example, allows you to post longer form content and simply concatenate the tweet and include a link for more information.

Having Twitter natively support 4,000 characters will be good to address these issues, but that does not mean it doesn’t come without its own set of challenges.

Below @MorningBrew compares the difference between 140, 280 and 4,000 characters. As you can see, the real estate required to display 4,000 characters is challenging, but I don’t think impossible. We all manage to read longer emails and websites, so having longer-form Tweets is definitely possible.

One simple solution to the length problem is for Twitter to display all Tweets in the same-sized content window, with a native option to expand the window and reveal the whole post. This would enable Twitter to maintain one of its best features.. the ability to quickly scroll through and skim content.

This raises the issue of API support for 4,000-character Tweets. It’s one thing for Twitter to update their own website, iOS and Android mobile apps (and hopefully TweetDeck), but what about all the 3rd party apps? Each app developer would first need Twitter to update the API to support the longer-content length, then work through the changes to the UI to accommodate the change.

Another challenge is the formatting. In a sentence or two, we don’t really need separation between content in the post, but if I’m writing a blog post, I often leverage heading styles, text formatting like bold text, bulleted lists etc and it’d be awfully nice to have support for this markup in a longer-form Tweet.

While we’re making changes to the platform, it’d be great to see the platform support images and video when creating a poll. It’d also be great to see some form of AI-generated images, particularly GIFs, rather than the standard GIFY options available elsewhere. Given Musk’s connection to OpenAI and their recent successes with DALL-E and ChatGPT, this seems like an obvious path forward.