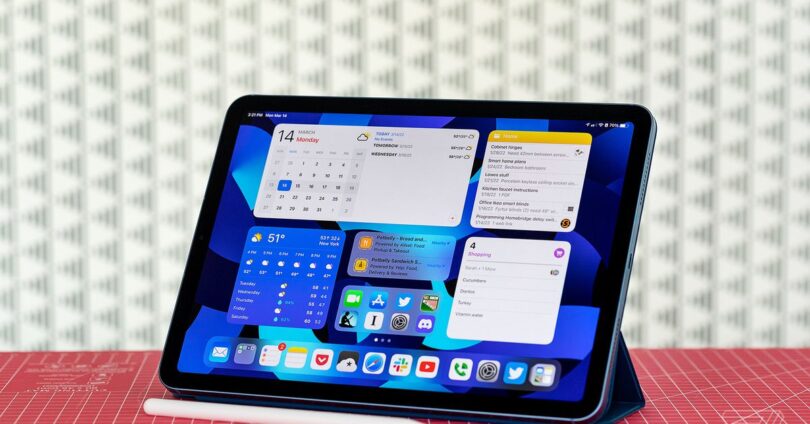 The holidays are quickly approaching, and if you’re doing a little weekend window shopping for yourself or others this weekend, we’ve collected a handful of excellent deals that we think we think will allow you to cross more than just a few names off your list.

Starting things off is the latest iPad Air, which is discounted in the 64GB, Wi-fi configuration at Best Buy to just $499.99, matching its lowest price to date. Apple’s newest iteration of its featherweight tablet includes significant upgrades to its performance thanks to Apple’s M1 CPU, and it’s equipped with a 12MP ultrawide camera with support for Apple’s Center Stage feature. Just like the older model, the fifth-gen Air features a 10.9-inch display and is compatible with all of the latest Apple accessories, including the second-gen Apple Pencil.

While its 64GB of storage is somewhat limiting, the 2022 iPad Air is an otherwise excellent tablet — one that’s a far better value than Apple’s latest models. Read our review.

The latest iPad Air retains the iPad Pro-esque redesign of the 2020 model but does away with the A14 Bionic processor in favor of Apple’s lightning-fast M1 chip. It also comes in one of five colors and boasts a 12MP front-facing camera with support for Apple’s Center Stage feature.

Sony’s WH-1000XM5, one of our favorite pairs of noise-canceling headphones, are still available for around $350 (about $50 off) at Amazon, Best Buy, and Walmart. They’re not a drastic departure from what we’ve seen before, but they offer a slimmer profile and better noise cancellation than the last-gen XM4s, not to mention improved sound and voice call clarity.

There are certainly less expensive options available if you’re shopping for a pair of noise-canceling headphones — in fact, Bose’s excellent QuietComfort 45 are currently on sale for just shy of $250 — but if you’re in the market for one of the best models you can get, the WH-1000XM5s are the pair to beat.

Target, Best Buy, and Amazon are both discounting the Fitbit Versa 4 to $159.95, down from its usual price of $229.99. The latest wearable in the Fitbit Versa lineup appears very similar to its predecessor but offers a slimmer design that replaces the haptic touch button with a physical one. It also offers more exercise options, including new options for CrossFit and skiing, and features a faster version of the Fitbit UI.

The Versa lineup doesn’t offer the same experience as more premium wearables — and Fitbit is still rolling out new features to the Versa 4 via software updates — but if you can tolerate the growing pains, the Versa 4 is a solid budget option.

Fitbit’s Versa 4 is its latest Apple Watch-like wearable (at least in terms of looks) with built-in GPS, heart rate monitoring, and an estimated three days of battery life while using its always-on display.

The weekend gift card deals at Eneba are a prime example of doing more with less. Now until 7AM ET on December 12th, you can get a $100 PlayStation Store gift card for around $85 when you use promo code PSNUSWknd at checkout, as well as a $70 Xbox gift card for $55.49 using offer code X70Wknd. If you’re planning to purchase a bunch of games over the holidays or weren’t sure what your favorite gamer wants to add to their collection, this is a fantastic opportunity to stretch your dollar.

In addition to games on the Xbox storefront, an Xbox gift card can also be put toward a subscription to Xbox Live or Xbox / PC Game Pass. A digital gift card can be purchased for a value ranging from $1 to $100. Right now, Eneba is selling a $70 digital gift card for $37.86 when you use promo code X70Wknd before 7AM ET on December 12th.

If you’re running out of space on your PlayStation 5 or desktop PC, you can currently find the 1TB model of the PlayStation-licensed WD Black SN850 M.2 SSD discounted to just $129.99 at Amazon and Best Buy. Normally $169.99, the PlayStation-licensed version of the M.2 SSD offers identical performance specs as other SN850 models but features a blue LED to let you know that you’ve installed it correctly.

Besides the obvious benefits of additional storage space, a high-end SSD like the SN850 can potentially help with load times in some games. The rated speed for the stock M.2 SSD on the PS5 is 5,500MBps, however, the SN850 can reach speeds up to 7,000MBps, offering a significant increase in performance.

A few more deals worth checking out this weekend

Update December 10th, 11:05AM ET: An earlier version of this post highlighted an Amazon deal on the 2022 iPad Air; however, the discount is currently only available at Best Buy. We’ve since removed the Amazon mention from this article.