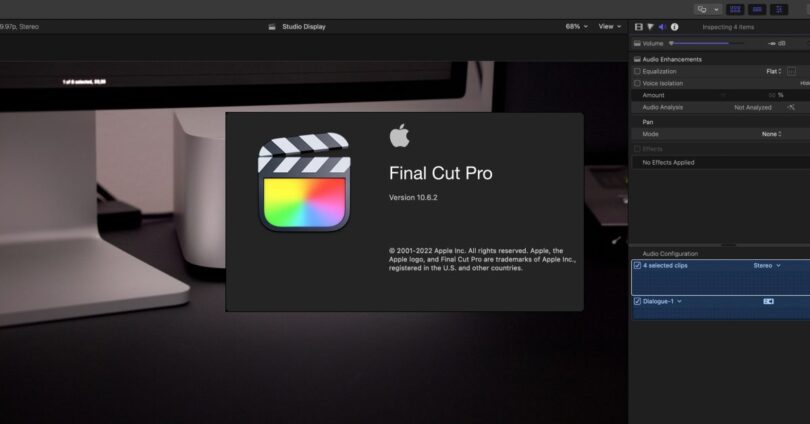 Final Cut Pro 10.6.2 and updates to its companion apps – Motion and Compressor – are now available for download on the Mac App Store right now.

To quickly identify duplicate ranges, simply click the clip appearance buttons and enable Duplicate Ranges. Dupes in the timeline are thereafter identified by a caution tape at the top of the clip. Users can use the handy Timeline Index to further identify and view duplicate clips in order of appearance.

In addition to duplicate detection, Final Cut Pro 10.6.2 includes a new voice isolation feature. Voice isolation helps to isolate voice frequencies from noisy environments using machine learning. To enable voice isolation, simply highlight a clip in the timeline and check the Voice Isolation option in the audio section. Listening to Martin’s example clip in the video above, I was pretty impressed by the results, especially in the example recorded in a noisy cafe.

A previous Final Cut Pro update introduced machine learning-powered native motion tracking into Apple’s professional NLE, and Apple continues to lean on machine learning for advanced native features in its pro apps. Instead of having to rely on third-party plugins, users now have compelling built-in options for both motion tracking and voice isolation.

In addition to Final Cut Pro 10.6.2 and its corresponding updates to Compressor (4.6.1) and Motion (5.6.1), iMovie receives a significant update as well. iMovie 3.0 introduces new Storyboards and Magic Movie features, which make it easier for creators to get started with making movies.

Here are the full release notes for Final Cut Pro 10.6.2

What are your thoughts on Final Cut Pro 10.6.2? Sound off in the comments below.