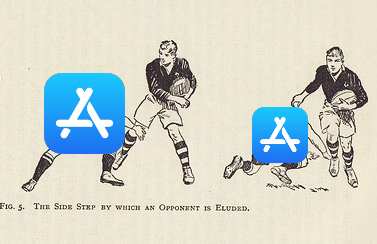 If the words of a prominent Apple analyst are to be believed, Apple could soon introduce sideloading to iOS. This would allow users to install applications on an iPhone without using the App Store, opening the door to applications not officially sanctioned by Apple.

The battle between iOS and Android has raged for a decade and a half at this point, and there are strengths to each platform. One of the key advantages of Android is its open nature, which allows for easier file management and the ability to sideload apps, or install applications outside of an official app store or repository. However, Apple may soon level that playing field by allowing users to sideload apps in iOS.

This rumor comes from Mark Gurman, a noted Apple analyst who has a fairly good track record with his predictions. According to Gurman, Apple will introduce sideloading to bring iOS into compliance with the European Union’s Digital Markets Act (DMA), which goes into full effect next summer. The DMA aims to introduce more competition in markets dominated by so-called “Gatekeepers” that hold an overwhelming market share or otherwise have instituted anti-competitive practices.

Apple would fall squarely into that category. Currently, the only official method of installing applications to an iPhone or iPad is through Apple’s App Store. If an app is not available on the App Store, then it cannot be installed to an iOS or iPadOS device (at least, not without some unofficial workarounds).

Apple takes a 30% cut of revenue on any app purchased through the App Store, meaning that Apple collects revenue on any priced software (i.e., not free) that is installed on an iPhone or iPad.

This practice was brought to the forefront in 2020 when Epic, the company behind Fortnite, sued Apple after the Cupertino colossus banned Fortnite from the App Store for collecting sales revenue outside of Apple’s established channels. Apple eventually banned Epic’s developer account. (As a note, Google also banned Fortnite from the Play Store on Android for circumventing its sales systems.)

The introduction of sideloading on iOS would create an interesting problem for what has long been a primary revenue source for Apple. It is unlikely that sideloading would drastically influence Apple’s revenue from the App Store; after all, sideloading is widely seen as a niche practice on Android due to the security issues inherent in installing applications through an unofficial channel.

Sideloading in iOS would also be quite a dramatic shift for Apple. The company’s CEO, Tim Cook, famously quipped that if users “want to sideload, [they] can buy an Android phone” back in 2021.

If Apple does introduce sideloading to iOS, Gurman believes it will be limited to the EU market, as that is where the only regulation that touches the topic is currently in force. That would mean iPhones sold in the U.S., Asia, and other regions wouldn’t be able to sideload, giving the European iOS world a key advantage over other regions.

There are methods for installing unofficial apps to iOS. Perhaps the most popular is AltStore, a project by Riley Testut. AltStore exploits the way Apple developer accounts and licenses work to allow iPhone users to install up to three unofficial apps to their devices. However, there are some heavy drawbacks. For one, the apps expire every 7 days and have to be renewed by connecting to a PC running the AltServer software within that time frame. Users are also really limited to two installed apps as the AltStore takes up one of the slots.

An official method of sideloading may mitigate these drawbacks and be another step in allowing consumers who purchase an iPhone to use their device how they want.

Buy a Backbone One game controller for iPhone at Amazon.

I’ve been a computer geek my entire life. After graduating college with a degree in Mathematics, I worked in finance and banking a few years before taking a job as a database administrator. I started working with Notebookcheck in October of 2016 and have enjoyed writing news and reviews. I’ve also written for other outlets including UltrabookReview and GeeksWorldWide, focusing on consumer guidance and video gaming. My areas of interest include the business side of technology, retro gaming, Linux, and innovative gadgets. When I’m not writing on electronics or tinkering with a device, I’m either outside with my family, enjoying a decade-old video game, or playing drums or piano.