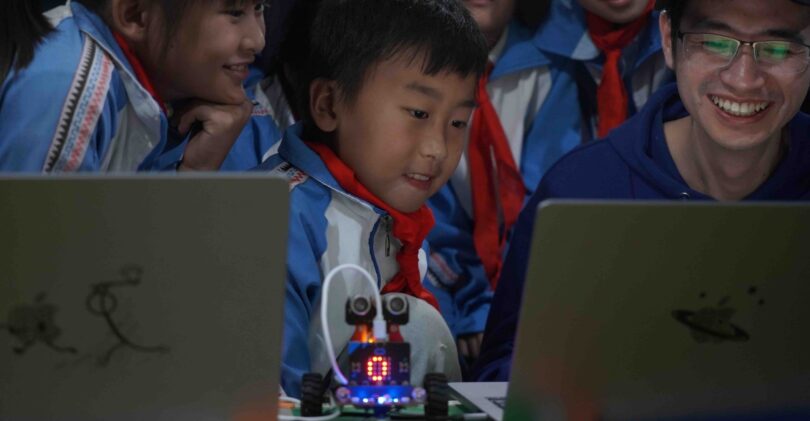 The project saw more progress with the achievement from Lancang Lahu Autonomous County, located near the southwest border of Yunnan Province.

Lancang Lahu, with Ethnic minorities accounting for 79% of the total population, officially got out of poverty in 2020. It is one of the counties to receive Alibaba‘s assistance.

The deeper connection of Lancan Lahu with Alibaba came in November of last year when Shaoqun Shen, an Alibaba staff member focusing on rural revitalization, travelled to the county and found a large gap between education in rural areas and urban cities, especially in tech education.

So he hoped to give full play to the strength of Alibaba technicians to broaden the horizons of children living in rural areas and ignite their exploration of science and technology.

Alibaba has selected and recruited technical talent in some batches to go to the countryside to help personnel training. Shuting Yu and Shaojian Huang are two of them. After they teamed up to participate in the 4×4 4WD competition at Alibaba, they had the idea of connecting 4×4 4WD with low-code programming, and wanted to teach children to learn programming in an entertaining way.

“There are also many youth programming courses in the market, but most of them are seriously commercialized. Not only are the pages fancy, but the prices are very expensive, which is not suitable for children in the countryside,” Yu said. She has served as a technical staff member at Alibaba for eight years, and started to do public welfare under the influence of the company’s culture. When she was pregnant, she began to pay attention to children, hoping to pass on goodwill to them. Although she can only write code in her spare time, she still hopes to set a good example for her children.

Alibaba‘s low-code platform was originally used to serve commercialization. On this basis, Yu and Huang wrote an open-source programming learning plug-in for teenagers, which was embedded on the platform. “In recent months, we have been working overtime to write code, and seeing the children’s smiles, everything has been worth it,” Huang said. In the future, they will open the low-code programming platform to rural children free of charge, and expect more programmers to join in.

In addition, Shen will organize course training for more information technology and science teachers in the county to better cultivate youth skills.