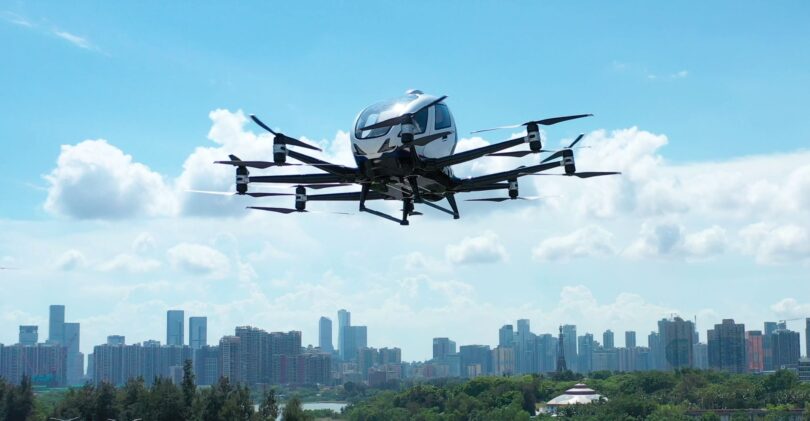 EHang Holdings, a leading autonomous aerial vehicle technology company based in Guangzhou, announced on November 21 its participation in a European Union-funded project called “SBAS (EGNOS) Adoption in Multicopter VTOL Aircraft” (SAMVA). This initiative involves the deployment of European geostationary navigation overlay service (EGNOS) on electrical vertical take off and landing (eVTOL) aircraft operations, such as EH216 AAVs, across the continent.

Under an initiative conducted by the European Union Agency for the Space Programme (EUSPA), SAMVA focuses on the implementation of EGNOS satellite-based operations on eVTOLs to enhance advanced air mobility services and U-Space airspace integration. The project consortium is composed of highly recognized partners across the industry, including Aeroports de Catalunya, EHang, Pildo Labs, the Airports Regional Council, Thales-Alenia Space, and Eliance.

A part of SAMVA, Aeroports de Catalunya and EHang plan to establish an AAV operational center at Lleida-Alguaire airport, where they will conduct EH216 flight demonstrations with EGNOS deployment and showcase how EGNOS can support and enhance unmanned aircraft system traffic management tasks and AAV urban operations.

Nasdaq-listed EHang provides customers in various industries with AAV products and commercial solutions, such as air mobility (including passenger transportation and logistics), smart city management, and aerial media solutions. It gained approval by the Civil Aviation Administration of China in 2018, becoming China’s first manned autonomous aircraft pilot unit. Its products have been successfully used in rescue, medical, transportation and other professional fields, and have conducted test flights in 11 countries.

According to Frost & Sullivan, the global manned urban air traffic market will grow from $300,000 in 2019 to $2.995 billion in 2023, representing a compound annual growth rate of 531%. At present, the widely recognized path is through eVTOL. Enterprises involved in research of eVTOL can be divided into two categories: one includes giants of the traditional aircraft and automobile industries, such as Boeing, Airbus, Toyota, and Geely, while the other category includes innovative enterprises such as US-based Joby and Archer, German Volocopter and Lilium, and China’s EHang and XPeng AeroHT.

SEE ALSO: Chinese Firms Are Trying to Make Flying Cars a Reality. Can They?

The roadmap for smart civil aviation issued by the Civil Aviation Administration of China calls for the establishment of an unmanned air transport system by 2035. Self-piloting aircraft could help to save on labor and fuel costs. Compared with the traditional asset-heavy modes of transportation, such as aviation, railways, and highways, the cost of maintenance and infrastructure construction of unmanned aircraft is lower. With the progress of related technology, the establishment of industry standards and supervision, eVTOL technology is expected to achieve large-scale commercial application.