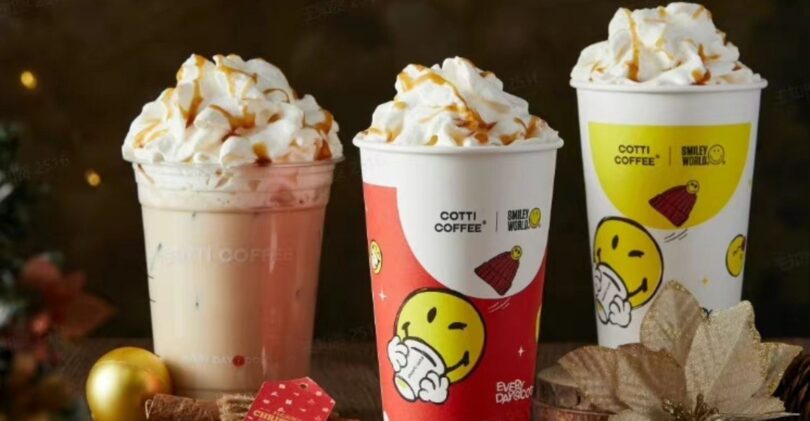 Cotti Coffee, a new coffee brand created by Luckin Coffee’s original core team, opened its first store in Shanghai in November, situated next to an outlet of its competitor, Starbucks. The coffee brand is also the sponsor of Argentina, the 2022 World Cup champion. Chinese media outlet “Bright Company” visited the store. The following is based on the report of the media on December 23.

There are about 10,000 white-collar customers in the area where the first of Cotti Coffee stores is located in Shanghai, and almost all coffee brands in Shanghai are gathered there such as Starbucks, Luckin Coffee and Manner. One Cotti Coffee staff member said, “The office staff here is dense and coffee brands are concentrated, which is conducive to brand promotion.”

The entrance of the store opens to the inside of an office building, not to the road. The words “Luckin Coffee founder strives to create Cotti Coffee” is prominently posted at the door, and the electronic screen in the store also shows similar content, the founder being Charles Lu. The store is designed in black and red, and the logo is an oblique “@”.

The store is about 40 square meters in all. There are 4 staff members in the store, with 6 small round tables and 12 chairs. The sign at the entrance shows that the new products launched for the Christmas season are Taffy Raw Cheese Latte, Taffy Raw Cheese Heavy Milk Tea and Taffy Raw Coconut Latte. A signboard with a QR code that contains daily benefits, new product recommendations, discounts, and prize-winning interactions is displayed along one wall of the store.

At present, Cotti Coffee has more than 40 products, with the same price tag as that of Luckin Coffee, from 18 to 32 yuan ($2.57 – $4.58). During its initial trial operations, many of the cafe’s beverages will be priced starting at 9.9 yuan.

In the just-concluded World Cup final, Argentina finally won. The team was favored by many Chinese sponsors before the competition including Cotti Coffee. Therefore, most of the company’s recent promotions, products and packaging are all about Argentina, football player Lionel Messi, and Christmas. The coffee company was also the sponsor of the 2022 Chengdu Marathon.

On October 22 this year, Charles Lu, former chairman of Luckin Coffee, and Jenny Qian, former CEO of Luckin Coffee, announced the opening of the first Cotti Coffee store. In less than two months, the brand completed naming, supply chain operation, and distribution of stores across the country.

However, although Cotti Coffee claims to be similar to Luckin Coffee’s business model, the development strategies of the two brands are not the same. Luckin Coffee focuses on coffee-related beverages with a focus on lower-tier cities while Cotti Coffee sells items related to coffee consumption, such as desserts and other beverages.